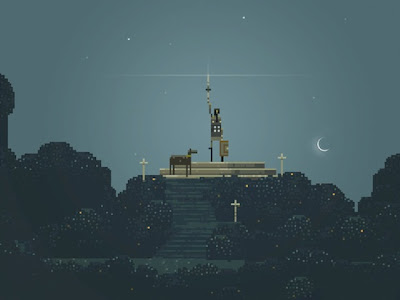 To The Moon was such am amazing experience, I keep asking friends to get it but hardly any of them wanders outside of Steam. As for my personal list for this year, I play a lot of games, very different types and for different reasons, with that said I'd rather talk about what games I think I'll remember the most years ahead than what games I played the most or thought they were the "best" by some predefined standards.

From To The Moon I'll remember almost everything about it, the music, the characters, the emotional connection... the whole presentation, it's a work of art and I'm sure I'll always remember it fondly.

From Atom Zombie Smasher I'll remember the little yellow dots running away from the pink ones and actually caring.

From Portal 2 I think I'll always remember the great humor in it.

From Red Orchestra 2 I'll remember how tense and serious it gets, especially when compared to modern shooters.

From Dungeons of Dredmor I'll remember dying and losing a 5 hr character because I decided to play when I was in a hurry and ended up rushing into traps(I started over the next day).

From Skyrim I'll remember the wilderness, the dragon shouts, the music, but mostly the joy of getting back into a world I've been visiting for almost a decade now, and catching up on what has happened since the last time I was there.

3. Batman A.C. just for its colourful characters and I love comics

2. Portal, for it's brilliance

1. To the Moon, here's my opinion piece abt this most extraordinary game
http://www.mixedchicks.co.za/
Colette, you actually introduced me to To the Moon, I listened to the soundtrack from a link on your blog. The music touched me so deeply that I had to play the game. I've been gaming for decades and started giving up on finding something new. Thank you for writing abt it :)

Thanks Han! To know I passed To The Moon on to anyone really makes me happy, I think Kan Gao's work deserves major exposure. And that soundtrack! I could listen to it forever ^_^

I agree, trying to do my bit here in SA, but sadly the gaming community is like from another planet :( I wrote an article on it, most responses were wtf why you playing a game like that. I'm doing an interview with him next year, hoping that'll introduce him to our community.

It's good to see that people are deviating from the games being hyped up to be the best but really carried some disappointment. This is great list :D ^5

Portal 2 was probably celebrated by many for it's game engine and gameplay but I found it to be so much more. A constant roller coaster of discovery. The storyline immersed me greatly and I found myself never getting saturated and ever wanting to find out more about it. It's as if I had gone back in time and learned the story, the life of another that had really existed, I could see the newly introduced characters as you have exclaimed in my minds eye and felt like I was getting to know them :)

That being said the gameplay was so addictive that I couldn't rest until i had finished it.

Platformers also caught my attention this year, Limbo was one of the greatest I have ever seen, it's dark and twisted aura, it's enticing silence and lure to it's realm of intrigue.

Trine 2 is also an amazing piece of artwork, I could get lost in it's beauty for hours :)

The Witcher 2 was a fantastic RPG to me, imo it was really under rated. I enjoyed the story line and the "history" the writers created.

All in all, a great year for gaming. L.A Noire was also at the top for me. I played it on PC and even dreamt about it for nights at end!