Portal 2: The cure for the common sequel 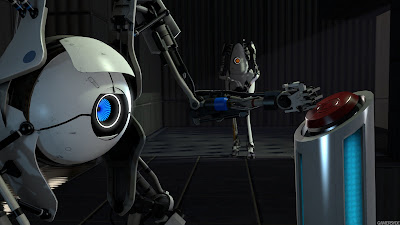 I am the kind of punk rocker (in my mind, anyway) that hates sequels with a passion. In my mind, there's rarely any genuine reason to make one beyond the realization that people liked the first installment of whatever it was you made, and if you make more, you can make more money. Since the motivation behind this concept is financially rather than creatively motivated, it always feels a bit forced -- hence the endless wasteland of sequels to films that would be better off having never existed (The Matrix Reloaded, anyone?).
Lucky for our set, it seems games are different .There have been some truly engaging sequels in past year, such as Uncharted 2 (with 3 on the way) and Mass Effect 2. The teams at work on these titles know that gamers expect more, and they seem to have some genuine regard for creating a better experience for us on the second go round. Sure, perhaps the motivation to make a sequel is still to build a brand and therefore make more money, but there seems to be something more going on behind the scenes. And we applaud that.
Enter Portal 2, one of the most anticipated sequels slated for this year. The original Portal set fans into a frenzy in which you couldn't go more than five minutes without hearing "Still Alive" played on Rock Band and hearing endless jokes and references to cake and lies. Don't even get me started on the t-shirts. It was a big deal. And even though I played it, and I agreed it was quite good, I found myself irritable about the endless buzz. Overhype. I mean, the game was good, but was it worth people's level of obsession? Was that Companion Cube tattoo really necessary?
I found myself revisiting the same idea yesterday when I picked up my copy of Portal 2. As a precursor to this, I should say that I haven't been feeling terribly inspired about games lately as a whole, and even some of the best produced titles on the market out there today haven't gotten to me like I hoped they would. I often cite lack of character development as the reason, but after playing Portal 2, I wonder if the issue isn't characters, but scripting.
You see, the moment I fired up Portal 2, I watched the opening cutscene and found that I wasn't once looking at the controller to see if I could press select to skip it. That's because from the word go, the writing is so deeply entertaining that you become completely engaged knowing little to nothing about your characters, which is a feat in itself.
Wheatley, the personality core you meet early on in the game that is voiced by Stephen Merchant, is so expertly executed that you cannot help but laugh aloud at your television just watching him. Ellen McLain returns to do exactly what she did with GlaDOS the first time, and somehow, it never feels forced. You never experience that moment of hand-to-forehead that you so often do in movie sequels as they milk some terrible one liner that's bound to be used in the trailer. Somehow, even references to the first game are elegant.
In the pleasure of playing such a beautifully crafted game, I found myself reflecting back to the last time I was so entertained by a voice actor's performance in a game. That accolade belongs to Jansen Friedh, the comic relief from Mistwalker RPG Lost Odyssey, one of the last RPG's I deeply enjoyed. Another expert voice performance, combined with pitch perfect writing, makes for instant engagement for the player. And almost magically, we begin to care about the characters. The bond required to make us play to the end is made. It's like some form of secret sorcery.
Watching the evolution of gaming for the past 25 years, I can't help but feel as if games like Portal 2 signify the next stage of where our beloved hobby might go. I've already mentioned that the polish and presentation of game sequels frequently outdoes the film industry, and we know from current studies that gaming is giving both film and music a run for their money in terms of profit. In fact, we are truly entertained. Unlike when we leave the theatre and promptly forget the summer blockbuster we just saw, we're meeting more and more characters who engrave themselves on our consciousness absolutely.
Is this a new trend in gaming? No. For me, it's happened since the first time I played Maniac Mansion. Great writing has been around for a long time. But games like that weren't evolved enough on a graphical level to compete with film. Our current titles are. And so we enter a new era of this version of entertainment we love so much. And it feels lovely to stand here in it, and see what it's becoming.
Posted by Colette Bennett at 11:05 AM

Merchant, Simmons, and McClain put in brilliant performances that really show how far VO has come along. None of them mail their performances in at all.

JK Simmons' Cave Johnson has a special vulnerability to him at the end of his character arc that really humanizes him and allows me to feel bad for him despite his callous behavior back in the 40s and 70s.

Stephen Merchant's Wheatley has an idiotic charm that you can't help but love no matter what part of the narrative you're in.

Ellen McClain actually does the most heavy lifting in this game. I don't know if it's just me, but the general unhinged, slightly malicious levity of GLaDOS in Portal seemed to be replaced by a very malevolent and angry GLaDOS and she closed it off with a begrudging respect at the end.

Valve is very quickly proving that it knows how to write and create characters. I can't wait to see what they do with HL2:Ep3 (if it ever comes out)

The weird thing is, I think I completely understand where you're coming from in this. I've reached that point in my gaming career where I'm finally starting to feel like I've seen it all.

However, I've been visiting a lot of PS3 games I missed out on because I came into this gen rather late, which means both really good gems and some more mainstream stuff, and oddly enough even the worse of the stuff I've played have kept me interested in finishing the games. I'm in the middle of GTAIV and I practically hate 90% of the gameplay, but a lot of the characters and their interactions are interesting enough to keep me invested. Same goes for the last game I played, Bayonetta.

I guess I'm just ready to see something new, really, and its always either gameplay or narrative, rarely a marriage of the two. There have been a couple of games that satisfied this need for me (Braid and the Bit.Trip games immediately come to mind) but I think I'm just ready for a game that takes itself 100% seriously again. And it kinda sounds like Portal 2 might just be that game for me.