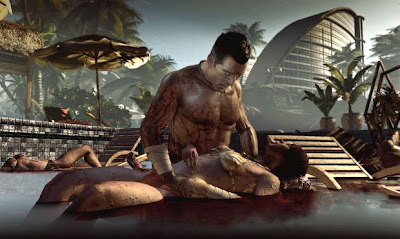 I have to admit, the last few years have been so glutted with videogames about zombies that when one is announced now I hardly give it a second look. And in fact, I have to admit that games have become so good looking in general, that I find myself glossing over a lot of them too. Even RPGs, once my favorite genre, look more flawless than ever, but so many games these days seem to lack the thing that made me so deeply attached to them in childhood.
Whatever that elusive thing is, Dead Island seems to have it. Techland describes their game as a "survival horror first person shooter with RPG elements", but truthfully, they could have called it a carnival simulator featuring a ouija board minigame and I would have nodded and said "Uh huh, uh huh" in numbed amazement, mostly because I've watched the trailer ten times and even though I have seen everything that can possibly happen in it, I can't seem to stop watching it.
It also hit me while watching this that the people that make trailers for videogames are going to be ashamed of themselves when they see this. And honestly, they should be. Not because the trailers we see these days are subpar, but because they are all painfully alike. Like sitting at a runway show and watching one impossibly tall and beautiful girl after another saunter down the catwalk. And you should be thrilled, really, to be surrounded by so much hotness. But for some reason, you're bored instead.
Dead Island's first trailer does not fire you up by using crazy music, show you how many guns you can use to reel you in, or even try once to look badass. Actually, it takes a more courageous approach by using a musical track that is slowly paced and introspective. it shows us how savage zombies are, and we've seen plenty of that before, but it also shows us the death of a child, a father and daughter's bond, and a family's happiness. We don't even know their names. But we want to, right away. And that is something that hasn't happened to me watching a trailer for an action game in a long time.
I have to concede that the piece of music accompanying this trailer is stunning, and that may be doing a lot of the talking here when it comes to the emotional wallop it seems to pack. We'll see as more of the gameplay is unveiled, but it looks like for now, we may have something special to look forward to. After releasing a trailer this unique, they have one hell of an act to follow.
Posted by Colette Bennett at 11:38 PM

Not to say the Dead Island trailer wasn't good. I actually did like it =D

I found the combination of the music and the backwards time of the events and how it leads to the father and daughter separating towards the end was beautiful. Not what I expected for a trailer for a zombie game. The music certainly had something to do with that and probably why I was able to watch the trailer three times today, watching it whenever someone links to it, but I think the concept of the backtracking leading to the separation was great. I'm a sucker for sentiment though.

Woah, feeling the same here, it´s funny that you look at thousands of trailers per year that you instantly forget about , but there is so little needed to make you interested/ involved in it. And still they don´t get it right, but this trailer on the other hand . Well... Video game marketing teams should pick up pen and paper NOW!

I actually don't like how the trailer goes. The music is a bit odd me. Well, maybe I became too immune on loud sounds and super action thriller of other zombie-related games.