One Chance: gaming and consequences 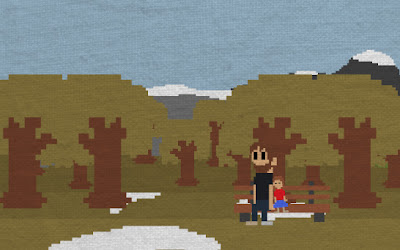 As we see games evolve, we find that our experiences within them become more realistic. And yet, there are basic tenets of gaming that still are determined to defy reality: monsters that drop money, treasure chests in the middle of nowhere, and last but not least, that ongoing fantasy world of being able to back up to your last save point and try again, no matter how poorly you planned your course of action.
What if you only had one chance to do it right?
New indie sidescroller One Chance from awkwardsilencegames presents you with just that opportunity. In it, you take the role of scientist John Pilgrim, who has come up with a cure for cancer that eradicates the cancerous cells within the human body. John is a hero, and the world champions his name as the papers publish the news. By day two, it's become clear that the cure not only destroys cancerous cells, but all other cells in the body too. And what once seemed like salvation has suddenly, overnight, because unintentional genocide.
Most interesting about the six days you have to take action within the game's time frame is that the creator of the game firmly states there is no replay feature. The comments on Newgrounds are full of people angry about it, and yet, he says the heart of the game is about facing the consequences of your own actions. For a gamer, that's a foreign concept. In fact, it's more a human life concept than something that belongs in a video game. Why, then, is it a part of One Chance?
It's easy enough to say that the creator of the game wanted to buck the system, or just piss off gamers by denying them what they are used to getting, but I think his statement is much simpler than that. One Chance is a depressing tale, and that seems to push many people away from it. However, it's also sure to shake you, make you think, and slow you down. In an age where we are constantly bombarded by social media, ways to delete and hide what we've said and done, and no real reason to think before we act, a game like this is a statement about the decisions we make, and how different our lives can be with as minor of a choice like going to work or staying home.
Several of John's choices present food for thought as well. Every day, he can go to work or stay home. His coworkers encourage him to be with his family as the situation worsens, but he can also ignore them and go to work anyway. He can sleep with one of his coworkers, since the world's about to end anyway. He can forget it all and take his daughter to the park. Each of these actions completely affects your last actions in this desolate few days before your world comes to a close.
Perhaps One Chance is overly dramatic. The chances of something like this happening seem more like a bad action/horror film than they do anything we could suffer in real life. However, that's likely beyond the point. There was a time when consequence in gaming was firmer, but since it "lessens the gaming experience" by frustrating the gamer, we see less and less of it these days.
We aren't accustomed to making hard decisions. We dislike consequence. Yet, I can't help but see a game like this as courageous by offering just that to us and asking us to cope with it. Perhaps we are too adjusted to the idea that any route is open to us. And while that's a lovely fantasy, it presents a softer gaming experience that may lull us into a sense of false safety. However, our strongest emotions are connected to consequences, choices, and loss, so by realistically asking us to look at those things and go through them even thought they may be depressing, they also engage us on a deeper level emotionally (something more and more games fail at these days).
One Chance asks us to experience it all as it really could be. And I think that's for the best.
Posted by Colette Bennett at 6:22 PM

Great game, I thought the part about going with the woman from the office instead of working would be funny. It was, until you get back home and his wife is dead in the bathtub. Then the icing on the cake is the little girl asking where mommy is.