Walking Into The Light With Journey 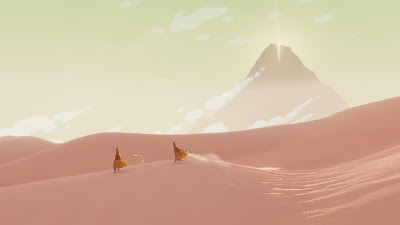 Have you ever had an experience with a film, a book, or even a song where when you watched the last frame, read the last paragraph or listened as the music faded away, you simply had to sit in silence for a while and just give yourself time to absorb it, feeling an energy thrumming in your chest and around your heart like a warm shimmering glow, but unable to speak or even move?
It happens from time to time, and it just happened to me. It's a lovely surprise every time it happens. I never know when its coming.
I expected a lot from Journey, the fourth game from seminal game studio Thatgamecompany. The "interactive parable to experience a person's life passage," as they describe it, looked like a stunning effort from the very beginning. I was enchanted with images of a sprawling desert, dotted only with a single figure in a billowing cape. I like isolation. Being a solo gamer for all of my life, I have no issue whatsoever with being on my own in a game, and I admit there was tremendous appeal in the idea of exploring a landscape that was completely empty.
As a child I often got so absorbed in games I forgot the world around me, and when I went back into it, I thought about the game world I had left behind and waited patiently until real life would allow me to go back there. As an adult, this feeling waned and eventually winked out, leaving me to enjoy games, but never to feel quite the same sense of wonder. While it sparked in moments here and there, that feeling of tumbling into a game's universe and leaving your own behind seemed to be a figment of my childhood.
Except Journey does just that. It commands your attention from the beginning, where you climb your first sand dune and see the mountain in the distance, glowing with a slice of light awaiting you at its peak. There's a goal in the distance, and it's calling you to move towards it. And you do.
The magic of the trip you take to reach the mountain is joyful and buoyant. Everything you've done in dreams becomes reality, as you twirl through the air and discover mysterious creatures waiting to guide you forward. You are shown visions. Your scarf grows longer, trailing behind you as you continue to move forward.
I can't talk about the ending of Journey because I don't want to spoil it (of course!), but also because I have no words for it. It's a metaphor for a real journey, of course, and we are all on it. It's open ended. It will mean nothing to some people. For others, it will mean everything. It's a language that some will know and others won't, but what is there has the ability to strike you to the core, and that's something games rarely have the wherewithal to do. A great story is one thing, but a story that is actually your own story is another entirely.
Journey is a game I believe I will play over and over. Perhaps it won't have quite the same magic it did that first time, and perhaps it will. Either way, I know I want to revisit what I saw there, if only to further understand how it made me feel.
For some, all they seek from gaming is entertainment. They want to shoot stuff and jump over things and rack up points, not probe their own souls. After twenty five years of gaming, I've had enough jumping and shooting to last me a lifetime, which is why I've been waiting a long time to play a game as transcendent and genre-defining as Journey. I needed something radically different to believe gaming could still move me, something that spoke to who I am as a adult and who I was as a child, and also who I will be in the future.
This was it.
Posted by Colette Bennett at 8:53 AM

I love you and everything you stand for.

But I totally get what you're getting at with this. I haven't played the game yet, only the beta, and the experience almost literally moved me to tears.

People always look at me funny when I say I don't give two shits about multiplayer/online gaming and I rarely get excited for the "big" games of the year, as they almost all come down to popcorn flick fodder. But it makes me so excited and hopeful for the future of gaming to see companies, big and small, dedicated to bringing these sorts of experiences to the medium, and we may just finally be entering the phase of games as an art where the medium is finally being used to probe real questions about the human soul and the life experience.

It's always a pleasure reading your stuff Colette. I can really tell that Journey ignited a spark in you that meant something, and I can't wait to play the game and discover that same spark in me.

Only a week until I can download the game and the wait is killing me!

Such a beautiful piece of writing. It resonates within me as I feel much the same way about games. I long for those rare one that speak to me on a deeper level. I do however enjoy the thrill of competitive gaming as well.