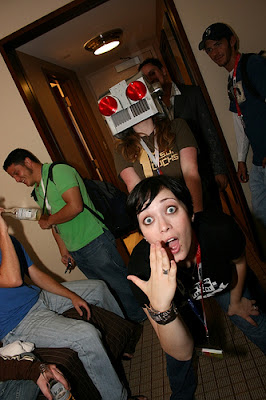 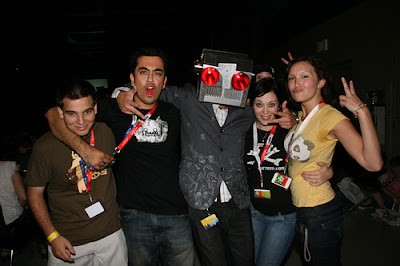 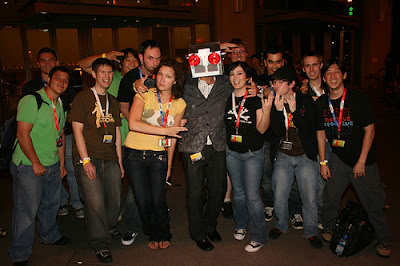 Everywhere this Destructoid gang goes, the party seems to follow. At the very least, that's how it seemed this weekend at PAX 2007. This was our first PAX as a group and we were fortunate enough to have a lot of our insanely supportive community come out as well as a fistful of editors. We saw hundreds of amazing games, some really great parties, and a whole lot of photos of the robot in action. You'd be surprised how many people have always longed for a pic of themselves with Mr. Destructoid.

The PAX show floor was well assembled, showing such titles as The Behemoth's Castle Crashers, Mass Effect, Rock Band (which I got to rock with Weekly Geek's Chris Furniss and Kotaku's Flynn DeMarco), not to mention a fine selection of MMO's to sample if that's where the action's at for you. I was personally most pleased with NCSoft's offerings as they have forever impressed me with their stellar City of Heroes. Titles shown at their booth included Dungeon Runners, Tabula Rasa and Aion. Thank heaven for life beyond WoW!

For swag whores disappointed with the lack thereof from E3 and GDC, this was the event to be at. I got tons of shirts and posters, keychains shaped like Wiimotes and stickers galore. We're doing a giveaway over at Destructoid shortly, so if you want to win some stuff keep your eye on the site for an upcoming photo contest.

By far this was my favorite gaming event I had ever attended. On the whole events are fun to attend but also are a lot of work and effort. PAX felt like a vacation from that, allowing us to check out bands like The One Ups and Freezepop in the evenings and entertaining us with keynote speakers such as Wil Wheaton during daylight hours. It seemed more than anything like an event that allowed gamers to unify and enjoy common interests than an event for breaking news and such. At any rate, I had a great time and I will certainly be attending PAX 2008!
Posted by Colette Bennett at 3:39 PM

2. I'm sorry I missed it. I would have brought three whole bags of Zazz™, too.

Man I've got a goofy look on my face in that last picture. PAX was an excellent time, and I wish we were all still there. I'll see you at E for All, Colette!