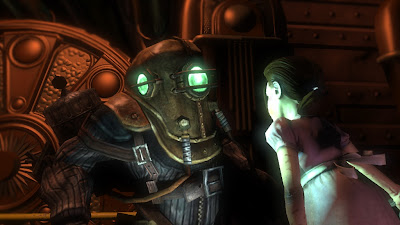 I have been playing BioShock for a week and a half or so, just like the rest of you. Of course, the relationship between the Big Daddy and the Little Sister had been often discussed by the time the game was released, and everyone was already aware that there was a moral choice involved in harvesting or saving the Little Sisters. It sounded easy enough, and as I've killed plenty of innocents in my time behind the controller, it seemed the obvious route was to harvest the little girls and take them for all the Adam they're worth. We want to win at this game, after all.

I thought this until I attempted my first harvest. Not only is the result profoundly disturbing, but you're left feeling dirty somehow, and the corpse of the fallen Daddy next to you is somehow ominous even after its fall. Even more clever is what happens if you choose to rescue the Little Sister - her reaction to your kindness is somehow sadder than any violent reaction could have been. Even after taking down many of these creatures, I realized I still could not perceive Big Daddy as an actual enemy, even though it was more than capable of pummeling me into a useless pulp. It does not harm the player when it is not aggressively attacked. What are we to make of such a creature?

Some would say we are emotionally affected by this experience because of morals or personal beliefs. Some perceive the Big Daddy as a father, even though it clearly has no relation to the Little Sister in a physical manner. It could also appeal to the empathies of parents who feel the powerful drive to protect their children. Since I have not experienced either being a parent or having the father/daughter connection as it is portrayed here, I know that I must be affected by something else, perhaps a more primal instinct.

The Little Sister test is one which may say a great deal about the player as he or she chooses the child's fate. Perhaps it can be explained away as simple empathy or the desire to take care of others. We are presented with a situation that is affecting either way it is played out. The lines are not as clear as good and bad though; there is a moral ambiguity present here. Is it wrong to kill something that's clearly evil? Or is everything worth saving, regardless of how far gone it may be?
Posted by Colette Bennett at 7:55 PM

Great insights! I felt a similar way when I played through Shadow of the Colussus. You're forced to kill these creatures to advance through the game, but each victory is such a sorrowful experience. I LOVE that games are moving in this direction. That's one of the cool things about getting older: watching your favorite hobby continue to develop as a legitimate art form.

You never know, perhaps many people would simply save the little sisters for the attached gamerpoints?