The King of Kong review: Go see it, like, yesterday 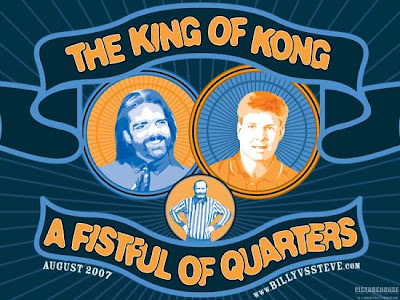 Our beloved Tiff at Destructoid was kind enough to post the trailer for The King of Kong for us last month, and I've been patiently waiting ever since to see the full film in the theatre. What I was expecting was a light hearted tale about competitive arcade gaming. What took me by surprise was how affecting of a story it was. When you're laughing one moment and moved the next while watching a film, you know someone's done a good job. Add in that the film is about games, and my admiration of it soars even higher.

I only had the vaguest idea of who Billy Mitchell was before I had seen this film, but in case you don't know, he's like a hybrid of mullet toting proud American hick and Darth Vader. He also holds the top arcade score for Donkey Kong in the world (apparently it was increased by him recently, but it has not been offically approved yet). The story is about the duel between himself and Steve Liebe, who currently holds the Guinness World Record for the high score.

Liebe seemingly emerged from nowhere after losing a job and rigging up a Donkey Kong cabinet in his garage to perfect his game. In the long run he succeeded, and the story runs from there as he travels out to Hollywood, Florida to the legendary Fun Spot arcade to do it all live. To say that the story that naturally develops between Mitchell and Liebe is fascinating hardly begins to cover it. The men are such complete opposites that the roles of light vs dark are inevitable.

Producer Seth Gordon and Director Ed Cunningham have done a clever and memorable job telling a hell of a story, making it well worth the ticket price. Some good PR chap made sure the theatre it premiered at in LA had a Donkey Kong cabinet in the lobby, and by the time I got back outside, it had gained a line of moviegoers waiting to insert their coins. Somehow it does my heart good to see the tradition of arcade gaming still thriving in the modern day, regardless of how advanced next-gen becomes. Now get out there and support flicks like this so we can keep arcades alive!

[Special note: Keep your eye open for special guests from The King of Kong on Destructoid's RetroforceGo! podcast coming soon!]
Posted by Colette Bennett at 10:55 AM

For what it's worth, the guy's name is Steve Wiebe, not Liebe.

At any rate, I'm really looking forward to seeing the movie, even though my understanding is that it's riddled with inaccuracies, generally geared towards making Billy Mitchell seem like much much more of an egomaniac than he already is. Still looks quite entertaining.