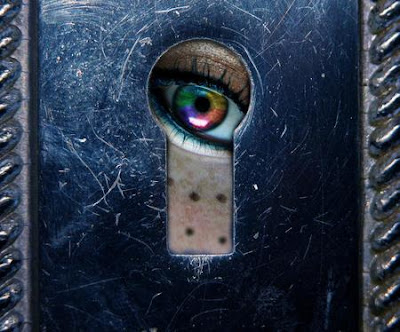 I've never been big on privacy. And so as social networks have come and gone, I've been more than okay with splattering them with personal photos, status updates, musical preferences, cutesy photos of me with boyfriends, even memories from childhood. The fabric that makes up our lives seemed to be a thing worth sharing, and so I shared it, and I never spent a lot of time thinking about who would read it and what they might think, because I had that fierce pride that accompanies youth where you feel you must burn through the world and show them who you are with all the blazing fury of a person with everything in the world to prove.
I got a bit older, but I kept sharing. Smartphones got fashionable, then in a seemingly effortless motion, necessary. Photos taken on the fly became commonplace. Going to bars and other social outings and seeing people staring into their phones, trying to capture it all in a perfect Instagram shot or Tweet, encapsulated the irony of it all: In trying to use all the new social media at once, we were so busy capturing all the moments of our lives that we were effectively distracted from living them. It looked like we were living them, in the pictures. But what do we remember about those days and nights that wasn't pressed into a digital photograph?
Facebook ushered in a new level of ability to "research" a person on the internet, better known as comprehensive stalking and something that many people admit to enjoying (me included). In the Friendster days, you could go ogle shared groups or photos and peek through a keyhole into the life of a stranger, or perhaps a person you barely knew at all but wished you knew, or knew a little bit but wanted to know much more. It was fun, this glimpse into a life, even the part where you pretended you might be a part of it.
The combination of Facebook and Twitter is an intoxicating combination when it comes to researching that guy you met at the book launch party or the St. Vincent show who smiled for a second longer than he should have when he was about to leave. Essentially there's nothing wrong with it, we all agree to the information that we put on it. And we can restrict that in any way we want. We can go and see what a person's stream of consciousness is like on Twitter, and make key judgement calls: Do they complain frequently? Do they act like they're above the common guy? Do they use annoying internetspeak and sub in letters for entire words?
Yesterday Facebook introduced Timeline, and we all ahhhed collectively. It was still clean, still functional, but really pretty, and best of all, it didn't just swallow up the moments of our lives in big gulps only to digest and excrete them, never to be seen again. It cataloged them, like a photo album. Suddenly we found ourselves surfing back months or even years to see what we did, who we talked to, who we took photos with. With the click of a button, there was a public view available that showed off every bit of our online activity, all in one place.
It was more information than had ever been available before -- in fact, you could literally see every bit of any given person's thoughts, choices, feelings, travels, and whatever else they chose to expose to the barren maw of the internet.
It's brilliant, and it's also terrifying. We can find out so much more than ever before about the people we come in contact with, to the point where we can look at a scrapbook of their lives that is so comprehensive that it makes us feel as if we are in fact included. And there's something there that we will blissfully ignore: We may not be included at all, but we will absolutely feel as if we are.
Will this lead us to chances to know each other more? I don't know. I think it's more likely to increase the power of that illusion that we do, but really plug us further into our computers, our internet presence, and maintaining a persona that matches it. Before we know it, we realize it requires actual upkeep and perimeters -- we want some people to see it, others we don't. We realize certain things cannot be said. It's like a date where we have no idea how to be, so we try to be fluid and flexible and open and interesting and in the end barely show a scrap of who we actually are.
Are you a digital being? Or a flesh and blood human, sitting behind a computer, trying to express life and your experience and not miss it all at the same time? How can you do it?
Posted by Colette Bennett at 5:36 PM

Personally, social media networks like twitter or facebook just are not my cup of tea. I enjoy spending time with someone face to face. There's nothing like picking at someones brain when you have that first meeting click. Call me old fashion I guess but, I feel social media works for some people and not all. In your case it seems to suite you and your online success with the start of tomopop.

So much to think about in this, social networking changed so much about us, and I dont think we've realized just profound these changes have been. Thank you for writing this.