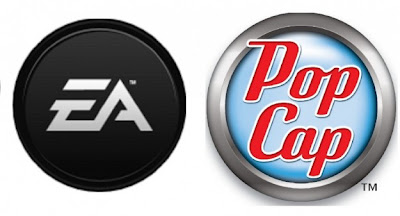 Game company acquisitions are not a unique thing in this industry -- they happen all the time. If you're just a person who enjoys games, or maybe even more than that, you may pay attention in a general sort of way. But you probably haven't really worried too much about the meaning of an acquisition unless you're concerned it may affect you in some way.
For instance, in April 2003 it was officially announced that SquareSoft would be merged with Enix, who were famous in Japan for their Dragon Quest series. SquareSoft had created many of the RPGs that had had the biggest impact on my heart and my memories as a gamer, and I recall that this was the first merger that really scared and worried me. As it turned out, I was right to worry -- just because two fine companies make great products individually doesn't mean that those visions will merge well together. And sure enough, the tone of the Final Fantasy series changed drastically, leaving many fans feeling as if the series they once loved had lost its footing (more on that topic another time, when I feel in the mood for a real rant).
Let's fast forward to the recent announcement that behemoth gaming company EA has acquired indie developer PopCap for a cool 1.3 billion dollars. While I never expected one of my favorite developers to be a casual game company, PopCap has really struck a home run with me this past few years, especially after the release of Plants Vs. Zombies. I loved everything about this quirky developer and their addictive, simple to play games. Needless to say, brows furrowed when this acquisition was announced, despite a lovely letter on PopCap's website assuring fans nothing would change about their approach. We want to believe. But we've heard it before.
On the bright side of things, we've got word that PopCap may have some sort of out (which sounds ridiculous, but bear with me). Digital Trends says that PopCap can continue to operate as they always have, and that if EA tries to change anything against PopCap's wishes, that PopCap can "bail." Since when are contracts written like this? I somehow doubt the validity of this concept.
Blizzard's merge with Activision has left the company's output, tone and quality more or less untouched, and fans don't seem to feel they've lost anything. PopCap may go down the same route if EA is smart, merely helping EA to move towards the casual gaming goals they clearly hope to achieve. It seems they feel PopCap is a vehicle that can help them to get where they want to go ... but we can only hope that they will respect the integrity of the vehicle itself.
I'm hoping for the best here, as I've grown to deeply respect PopCap and look forward to their new releases. I feel companies these days have a better appreciation for keeping the elements what makes a developer unique when it comes to acquisitions, but still, there's always a chance of things changing radically if the right suit has his say.
In other words, as long as invasive DRM stays out of my PopCap experience, I'm happy.
Posted by Colette Bennett at 5:51 PM

This seems like a strange merger for some reason. I know PopCap have almost a marmite level of love/hate relationship in the gamer community but all I can think of with EA is The Sims and their sports titles which are pretty bland and in no way as fun and addictive as PopCap titles.

I hope for the best too as Plants Vs. Zombies is one of my favourite titles :).

I hope the purchase doesn't change to much. I'm a fan of the Bejeweled series and I hope EA doesn't screw anything up.