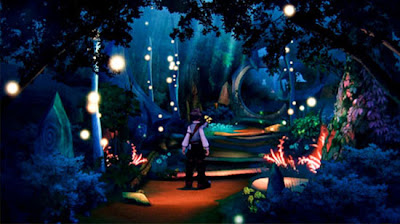 The only thing that could excite me after the holy sacrament of scrumptiousness that was BioShock was a good solid RPG. I was expecting something a little more utilitarian as RPGs have not broken the mold much lately, so it was a great surprise to play Eternal Sonata at E3 and find not only an exquisitely beautiful title, but one that seemed to have a truly unique storyline as well. I raced to the store today and snatched up the last copy, eager to dive headfirst into the game.

As shallow as it is, I have to say it: For a dying guy, Chopin is SMOKIN HAWT. I think it's his voice actor making it so, as I want to melt his voice into sweet cream butter and rub it all over my nubile flesh. Now that we've gotten my kinky bits out of the way, I don't have to keep making unintelligible references throughout this article. Eternal Sonata is ten times as beautiful in actual play as it is in screenshots and clips -- for some reason, they can't seem to do justice to this title. Playing the first few minutes literally feels as if you've submerged into a completely different universe, which is something RPGs have been failing at a lot lately. Of course, atmosphere can only go so far.

The first half hour of play is as story heavy as you might expect. While the demo may lead you to believe the game will be very simplistic, there is a rich story concept at the heart here. I expected nothing left from a game that is about the dreams of a dying composer, but it's nice to see the story unfolding well even at this early stage. Players annoyed by cut scenes may be bothered and want to get to the gameplay, but luckily these scenes can be skipped if you like. They add a lot to the story though, so be warned you may miss some great details if you do.

So far the fighting is good, but I wouldn't go as far as to call it great. I like the free range movement and the way the attacks feel while landing, but the initial few areas have you meet the same creature through the level over and over, and the battles get a bit repetitive. I'm hoping as music becomes more involved, it will help with this. Turn based fighting can kill a game in the modern player's eyes, so it needs something to keep it interesting (demonstrated beautifully in the old PS1 title The Legend of Dragoon.)

Bottom line: If you love RPGs, pick it up. It's beautiful, the story is interesting and so far the play is comfortable. I'm fascinated with the use of music and can't wait to learn how to use it. Frankly, regardless of whatever the games' weaknesses may be (listed here or not), it beats the hell out of fighting poop monsters in Blue Dragon. Whose idea was an enemy made of poop, anyway?

Posted by Colette Bennett at 12:42 AM

I'm 6-7 hours in right now and I really love this game, my 2 complaints is how the bosses don't connect to the story in anyway and the times where you learn more about Chopin's history it just shows pictures where either in game cut scenes or FMV's could of been instead of ugly pictures.