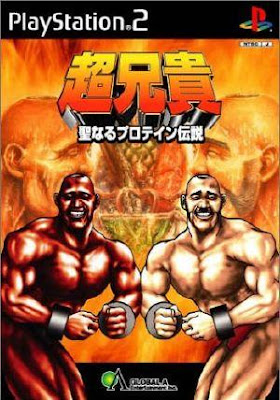 I'm joking. Partially. I was browsing about the interwebs today when I stumbled upon this gem and felt I needed to enlighten any readers that are not privy to the delights of the Cho Aniki series. For those of you who have no idea what I'm talking about, Cho Aniki is a shooter series famous for its large army of greased, muscled, suggestively homoerotic men doing suggestively homoerotic things. It debuted in 1992 on the TurboGrafx 16 and has been wreaking its own special brand of WTF? over Japan ever since. (Actually, considering the Japanese culture, they probably don't blink twice at this title.)

Fascinated yet? If you feel strangely drawn to the concept, I have just the thing for you: the fabulous Hudson has announced that they are going to be releasing Cho Aniki as one of the first of a series of Turbografx CD and TurboGrafx Duo titles coming to the virtual console, along with Y's Book I and II. It likely will not be Cho Aniki Seinaru Protein Densetsu, as there are more popular games in the series, but can you imagine using the Wiimore to shoot your 'Holy Protein" around? CAN YOU? Releases like this are likely stabbing the collector's market in its theoretical face, but there will always be those people that have the have Cho Aniki mint in box with collectible figurine of greased nude male with flowerpot growing from head.

[Via Kotaku]
Posted by Colette Bennett at 1:31 PM

I'm psyched about it too. Though I've never played the games before, I stumbled upon them some time ago and became fascinated with them. I'm even the one who started and wrote most of the Wikipedia page on the series.

Still, I think we may be the only ones this excited about it.

I have them all (including the Wonderswan RPG/card game), and they definitely will live up to your expectations in their bizarre and perhaps not so ambiguous sexuality, they are very very hard, so I unfortunately haven't seen much of the game content. I doubt they will come to American virtual console though... I can't imagine how the ESRB would rate them.

I have them all (including the Wonderswan RPG/card game), and they definitely will live up to your expectations in their bizarre and perhaps not so ambiguous sexuality. Unfortunately, they are very very hard, so I haven't seen much of the game content on the whole. Perhaps I should investigate finding cheat codes for them, but due to my lack of knowledge of the Japanese language, that might be hard to come by. I doubt they will come to American virtual console though... I can't imagine how the ESRB would rate them.