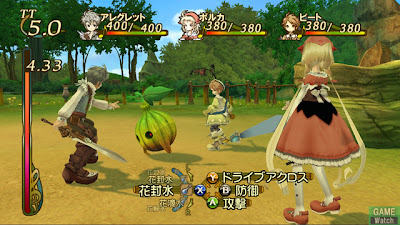 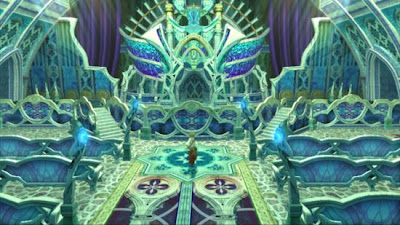 No.....really. This demo is gorgeous like I can't even begin to explain to you. The art style is triumphant, the details are perfect, it moves fluidly, the music is gorgeous. More importantly, even though there isn't any story revealed in the demo, it doesn't suffer from that feeling of hollowness that many current RPGs seem to. While playing, I had an echo of the way I felt while playing Final Fantasy 7 for the first time, which I can only think of as a good thing.

I haven't enjoyed an RPG battle system as much as Eternal Sonata's in a long time. While Final Fantasy 12 seemed to master the art of free movement and flow for battles, there is something about the way this system works that I find very satisfying to play. You have a bar of time, which does not begin until you move, to use in any way you like. You can get in a few attacks, heal and even cast a special attack all in one turn. It's basically the indecisive player's dream come true.

For me, Eternal Sonata also nails a difficult middle ground in that it is cute without being completely nauseating. Sometimes the little phrases before or after a battle literally make a game distasteful for me; I feel as the writers chose to speak down to me as the player when the character personalities are too dumbed down(Blue Dragon was a perfect example). While I prefer no catchphrasing at all, the title seems to balance out it's tone well, and I don't want to throw any of the characters out the window yet, which is always a good thing.

My only negative point about the demo is that I wanted to see more of the musical aspect of the game, as I have been fascinated with that concept since it was announced. You can speak to someone in a town about it, but there's no ability to experiment. My hopes are high for how this will work into gameplay and storyline. The title is already a pleasure to play, even without this additional feature.

Eternal Sonata's impact on 360 may dictate the possibility of more RPGs for the system, which is something I would really like to see. It's been the only thing that held me back from buying it when so many other gamers were already enjoying theirs. I enjoy it for what it is, but no matter how advanced a console is, it's useless to me without a selection of games I enjoy. If Microsoft keeps expanding their horizons, 360 truly could end up as king for some time -- especially if Sony keeps struggling. Regardless, after playing this demo, I look forward to the release more than ever. This one looks like a winner.
Posted by Colette Bennett at 11:41 AM

You convinced me to make this demo my first official download when my 360 arrives. I had the same hesitations as you did about the 360, but they're seriously roping me in with Blue Dragon and Eternal Sonata.

You can, actually, figure out the music thing. There's one score in the middle of the flower field and then one on the shelf in one of the houses -- maybe even Polka's house? Can't remember. All it does is give you rewards in exchange for matching the pieces you've collected with those of the people you meet.

I'm not sure how I feel about it yet; It sure is pretty, but it feels a little bit hollow to me, actually. Superficial? I'd have to play it as an experience to know. Recalling my feelings of FF7, not so much, but Chrono Cross, maybe.