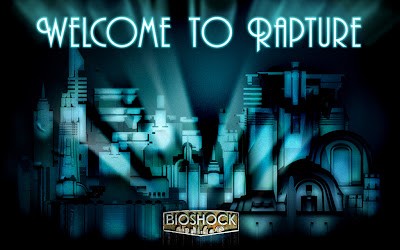 Let me preface this post by saing that even though I have attached a picture to it, it does this title absolutely no justice whatsoever. Seeing screenshots and gameplay videos does not compare to the experience of seeing the world of Rapture open up before you.

I can say with all surety after playing this demo that 2k has made a masterpiece that is going to redefine the medium and perhaps create it's very own genre altogether. The game is marketed as a shooter, but is is infinitely more than what I know shooters to be, even at their very best. The average shooter lacks a story, and Bioshock is the absolute opposite of that. From the very first moment you emerge into the world, choking on water as you watch the airplane you crash landed in sink slowly into the sea, the story is already pulling you in with urgent intimacy. By the time you step through the golden doors of Rapture, you'll have completely forgotten about everything else.

Total immersion is not a good enough descriptive term for the first ten minutes of Bioshock. We are given a few moments to absorb this flawlessly designed universe before things go completely haywire. The atmosphere has a Art Deco-just-barely-masking-an-underground-cult vibe that somehow manages to strike the perfect balance between melancholy and madness. Meeting some of the residents of Rapture nails it down -- you've stumbled from real to surreal in a transition so smooth you never even noticed it was happening.

One thing I found remarkable about the game was how it exhibits features of multiple genres, but abstractly so, as you may smell many fragrances in a single perfume. The beginning reminds me a bit of the Myst series with it's incredible detail and immersiveness, but there are also traces of PC titles and indie games that it reminds me of. Most of all, Rapture reminds me of a world of adventure gaming we are rarely lucky enough to see anymore, and to see that merged with a popular genre like shooters gives me hope that I may continue to see more of the same -- or the birth of completely new genres altogether.

The only complaint I have is that the demo is short -- I was done in about 30 minutes, and I took my time looking around. Still, it has the intended effect of leaving you drooling for more. Had I been sitting here with the full title rather than a demo, I could have easily played until dawn and probably not have even noticed. It's everything you hoped it was and more. There aren't too many titles that I feel I can claim for the "games as art"argument, but Bioshock truly fits the bill. It's simply astonishing.
Posted by Colette Bennett at 3:38 AM

I too was a little taken aback by how much content is thrown into each and every scene in the demo... if they keep that level of care and detail in every bit of the game i'll not only jump on the 'it's pushing it's own genre' bandwagon but i'll be saying GOTY Bioshock too.

A bit about that comment though... about it creating it's own genre - do you remember a PC game called System Shock or it's sequel? At the time they both exhibted the same level of interaction you see in Bioshock, and even a bit of the same atmosphere and story background [instead of a man creating a paradise, a computer was trying to maintain one, and you had a technologically-slanted biological upgrade ladder]. This is rarely tread territory for videogames I admit, but it is one that Irrational/Looking Glass has pushed to great effect in the past. For me, this was a great reminder of what that series gave me and is a fantastic extension of the ethos and execution previously touched upon in that series.

One more week before i finally kick sunlight out of my life for awhile...

My friend played this on his 360 and he said it scared the hell out of him.

Either that or he's just weak.