Will great gameplay save the galaxy? 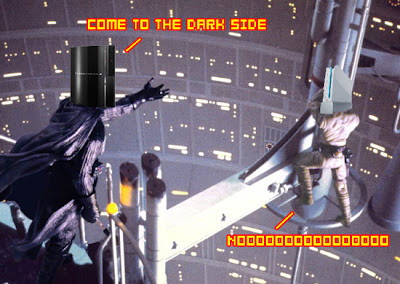 Rewind back about a year, to the erection-arousing time of Next Gen console announcements. Everyone expected slick appearance, top-of-the-line graphics, and the inclusion of technologically superior Blu-Ray in the PS3. What gamers didn’t expect was a price tag that would make them stammer and sweat, but that's what they got. It was obvious that Sony had chosen to aim for the high end adult market, which perhaps was a wise decision in their eyes. However, as a gamer who fell in love with the NES at age 8, it was difficult for me to be able to support their new direction. I knew had I been that same child today, my parents would not have been able to afford the PS3 and I would have missed out on the experience that has defined a great deal of my adult life.

In the meantime, Nintendo chose to take a different route with the Wii, announcing a campaign that focused on the inclusion of people from all walks of life. The Wiimote was extremely easy to use and unlike any other controller that had hit the market previously. Because of Nintendo’s decision to focus on ease of function over graphical superiority, they captured not only the general market and Nintendo’s dedicated fanbase, but also a demographic that had never played console games before. Gamers now had a console they could share with anyone from their kid brother to their grandmother. The system also made an impact on the elderly, brightening up many a retirement home with a previously forgotten sense of challenge and fun.

The competition at this point seems strongly in Nintendo’s favor; however, many Sony fans claim that as the PS3 sees more games it will ultimately be the winning system because of its capacity for longevity. Meanwhile, Wii continues to fly off shelves faster than retailers can stock it. As a retro gamer, it makes me realize that there is a big question at hand: What is more important to gamers? Graphics or playability? Microsoft seems to be straddling the fence with the 360, offering strong graphics and online play at a more affordable price point, but it seems the two extreme ends of the spectrum are PS3 and Wii – not to mention the ones generating the most buzz.

Since my experience with gaming was landmarked by the NES, obviously my love for it didn’t spring from amazing graphics (although when 16 bit hit the market, I thought my little heart would explode. It looked so good!). The games that made the greatest impression on me obviously possessed something more at that time that drew the love of millions of kids my age. Around the time of the PS3’s release, I clearly recall walking into a Gamestop with a PS3 display and an NES display at the counter with The Legend of Zelda in it. To say I was like a moth to the flame would be an understatement; even though I had never touched the PS3, I was perfectly happy to chase Octoroks instead, despite the fact I’d done it a hundred times before. What’s the secret?

It leads me to believe that while there are tons of gamers waiting on the next Halo or Madden to grace their HD sets, there are more than we realize looking for a different kind of gaming experience, whether it be retro, indie or just a totally different category altogether. The public has been complaining as of late that the Wii only offers “party” titles, which I would consider to be a mostly true statement with the exception of titles like Twilight Princess and Super Paper Mario. The Wii may be rapidly approaching its crossroads – if it doesn’t break the pattern, will people lose interest? Nintendo hasn’t welcomed a lot of third party titles since the SNES days.

On the other hand, this could be the fount from which Sony draws strength. PS2 had one of the most varied libraries in history since the NES, offering everything from Metal Gear Solid to Mister Mosquito. A Sony fan can’t help but hope that PS3 could have a similar future despite the long line of mishaps that have come with the new console’s launch. Here’s some food for thought: If you could be reassured that the PS3 would have the same future as the PS2’s past, would it be worth it to you to shell out the 600 bones to add one to your gaming shelf?

What is more important to you as a gamer – How your games look? Or how your games feel to play? Have we become shallow as consumers, only wanting the best looking games even if they’re devoid of solid content? If you could only choose to own one of these consoles, which would you pick?

Posted by Colette Bennett at 9:01 PM

Playability, obviously. There was no question that the Sega Genesis was graphically superior to the SNES. But who ever says that the Genesis was the Best. System. Evar?

It's gotta be fun or there's no point. I don't play FFXII 'cause it's pretty (although admittedly it is gorgeous).

If I had the money, as much as I love and appreciate the direction Nintendo's gone, I think I'd buy a PS3.
It seems pretty much a guarantee that there will be good games for it eventually. I like the fanciness of it. I'm thinking LittleBigPlanet.

I'm glad Nintendo has shaken things up. It's good for gamers. I not in a hurry to buy one, but if they release Beyond Good and Evil 2 for it (which was once rumoured in a far far away land) I'd buy 3 of them.

And the xbox... Urgh, it feels like a console for bogans. And it's Microsoft, I run linux for normal desktop use, I don't think I could ever bring myself to actually pay to use one of their products.

i own a wii and am thus far satisfied with my little engine that could. but to be honest...i can't help but be a little jealous at what i see in the ps3's future. little big planet, sony's home network, new final fantasy (zomg). and then i think to myself... do they really expect me to pay $600 for that? in terms of gameplay, will the ps3 bring anything that hasn't already been done? developers haven't even scratched the surface of the wii's gameplay potential. can you imagine multiplayer goldeneye with pinpoint accuracy? zack & wiki is claiming to use over 100 different "gestures." madden for the wii is the funnest one between the 3 systems. who wouldn't crap their pants if elite beat agents was announced for the wii?

I am going to have to go for the PS3 here. It doesn't just show off pretty graphics as well. With the PS3 have more power you can run harder algorithms and display larger environments with out having to load every ten steps you take. To me the technical capability can bring the PS3 a long and fruitful life of some amazing games with beautiful graphics and complex game play. Ultimately its the game makers who choose what system to work with or who's cash to pocket. I just hope we have more people like Hideo Kojima in the industry who make games that fit a system and not games just to make money.

Nathan Hamill said...
This comment has been removed by the author.
7:45 AM

My dad used to stay up to the wee hours playig 'The Little Mermaid' by Capcom. Is that why his head is a Wii?