A Call To Action: Bring Point and Click Adventure Back To Life 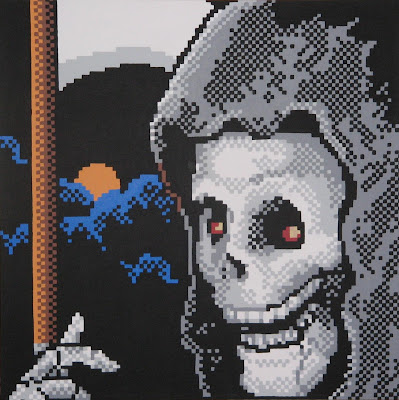 Last week, a post on Kotaku referring to the days of drawing your own dungeon maps in games like Zork struck a chord with me, as well as my co-worker at Touch Arcade (find him at @blakespot). Suffice to say I've been in one of those retro gaming moods where lots of shiny high-def new releases have been hitting consoles, and for whatever reason, not a single one of them has appealed to me.
This morning, I stumbled upon this not-at-all-new video which I somehow had never seen: a fan's remake of Shadowgate for PC, which was never completed but fascinating all the less. In case you have no idea what I mean, Shadowgate was one of a short series of games (MacVenture series) created by ICOM Simulations back in 1987 that led the player through a series of point and click scenarios. Other entries in this series included Deja Vu I & II, two hard-boiled detective mysteries, and Uninvited, a haunted house adventure.
I loved these games.
However, even as I read the aforementioned article about Zork maps last week, I asked myself the question: Are these forms of gaming obsolete? I recently spent some time playing Atlus's remake of Persona 2: Innocent Sin for the PSP, and while the dialogue and characters hold up quite well, I found I had much less patience for the random monster encounters every three steps. Sure, I played those when I was a teenager, because I had nothing to compare them to. Now, gaming is more intuitive, and we don't need to draw our own maps or spend weeks grinding in randomized fights. Some of us prefer those methods, but those numbers are dwindling.
The point and click adventure genre is not entirely dead, but it surely seems antiquated in terms of modern gaming. Look at my beloved Shadowgate as an example: rather than use a menu to select my actions, such as moving to a new room, my environment could simply be navigated with a controller. It saves time, but it also takes something out of the experience that I miss. Perhaps the MacVenture series created an unusual tension in that we were only allowed a window into the surroundings of their titles with no alternate views. We couldn't adjust the camera, so our imaginations were forced to generate whatever was outside of our line of sight.
This limited peek into a world will not interest most developers, who prefer to show you the entire world, and I understand why. I do. Why peek through a keyhole, when you can use the key and stand in the world? It makes much more sense. Except that I keep passing up these fully explorable universes, or spending time in them and finding for all their glory, I'm just not enjoying myself. It has nothing to do with the quality of the game. It's just that as gamers, we all like to stand in different types of worlds.
Can these games come back, exactly as they were? They cannot. They were experienced at a specific time, and the reaction to them is partially affected by the time period and the gamer's personal state of mine. Can they be created in new ways? They can. Jake Elliot's Ruins is a perfect example (and it's free, so you really should play it.) I applaud the developers courageous enough to continue to give us worlds that we can explore that differ from the norm. My true hunger as a gamer is to find those worlds that are not so average, and experience that magic again of peering through the keyhole. Perhaps I will find the key, and open the door, and find that what is inside is exactly what I was hoping to find. Or even better -- Nothing like I could have possibly imagined.
Posted by Colette Bennett at 11:52 AM

Reading the title of this one made me smile a bit. I do miss these sorts of games - the mechanics were clunky, but the best ones did create a unique emotional experience. Your key metaphor is very apt - literally, you would explore chamber after chamber, hunting for pieces of the key item or puzzle solution that would lead you into the next chamber, and in the moment of turning that key, you never did know what would happen or who would greet you on the other side. The atmosphere was truly magical, in the sense that it drew on mystery to create excitement and wonder - and that is in large part a result and a strength of the limited available interactions.

As you point out, these games need to evolve a bit, but I think there's still a place for them. I'm pretty sure that PUBLISHERS would have more reservations than developers about creating a world with limited interaction. "Dreamfall" by Funcom didn't top the charts or anything when it released on Xbox and PC, though it did better than you'd expect. And you've played Heavy Rain and/or Fahrenheit, right? Quantic Dream's games are essentially point-and-click, but you can freely navigate your environment. Plus they usually toss in an element or two of fantasy - I would really like to see them try something even more strange and ambitious. Telltale's Strongbad was point-and-click, but more frustrating than fun, IMHO. And I've heard great things about Machinarium, but have only played the demo so far. Thanks for the heads-up on Ruins, I'll take a look.

Re: Persona 2 remake - sigh. I had the same experience. At least I've gotten good mileage out of the included soundtrack. I will finish it, but I've switched back to Ogre Battle for now.

As much as I love the work that Telltale has been doing with adventure games lately, particularly Sam & Max, I can't help but feel disappointed that they're changed the games to fit a more modern world by mapping them to controllers instead of allowing for manual exploration. There's something magical to me about studying every sprite in the Secret of Monkey Island, hoping that one of the pixels might just be that of an item I desperately need. Now it seems I just have to tilt the stick slightly and the game says "would you like item A or B?"

Sure, point-and-click games might be antiquated, but they are antiquated in the same way a book from nearly a decade ago might be considered antiquated when compared to something like the Nook or Kindle. In the same way there's something about the crack of the spine of an old book, the smell of its age, the smudge of the type, there's that same sort of magic in clicking every multiple times just to have your avatar say "I can't use that," digging through every dialogue tree, and your imagination coming up for a more complicated solution for that puzzle (using those three items you picked up an hour) when the easier solution is right in your face.

People look at me crazy when I say that these are some of my favorite parts about adventure games. Hell, even while playing the latest Sam & Max, I had a friend lean over to me and say "that looks so frustrating, I could never do that." And I just smile, pause the game, and say, "really, that's half the fun of it... and you really won't understand until you embrace it yourself."

@BLkstar -- You can contact me at colette.bennett at the gmails!

How far can you reasonably go and still enjoy the games now that we all have a modern perspective? for instance, i love the 2 Ultima 7 games. However, going back and trying to play the Ultima 6 series of games is painful due to its lack of save features and text adventure interface

Its very true what she said.

nor should we want to. Telltale Games is doing amazing work with keeping the tradition alive and yes like Colette said we are losing something of the feeling now in new games.

Its rather similar to what music fans are experiencing now with the death of the album format.

Anyone up for Duke Nukem 2? (side scrolling freeware game)

i didn't think so

How far can you reasonably go and still enjoy the games now that we all have a modern perspective? for instance, i love the 2 Ultima 7 games. However, going back and trying to play the Ultima 6 series of games is painful due to its lack of save features and text adventure interface

Its very true what she said.

nor should we want to. Telltale Games is doing amazing work with keeping the tradition alive and yes like Colette said we are losing something of the feeling now in new games.

Its rather similar to what music fans are experiencing now with the death of the album format.

Anyone up for Duke Nukem 2? (side scrolling freeware game)

i didn't think so

:) Happy to read this. Preach on, sister.