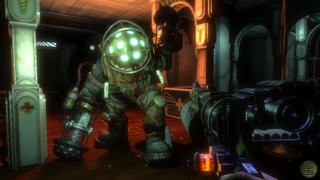 I have long acknowledged the XBox's big , fat delicious specs and graphic prowess. I know it runs gorgeously. All that is wonderful, but my constant complaint for this system was:no story, no story, no story. For anything. Of course, there is a certain (large) demographic that wants no story, only to blast things to bits and drive mindlessly fast cars. I recognize that as fun, but you know, these damn RPG players want a STORY, and since I'm one of this snobby breed, I haven't paid much attention to the XBox since it became evident that Microsoft was unconcerned with this genre altogether.
Yesterday, I'm reading a magazine and stumble across the previews of a game called Bioshock. And finally, finally, I find myself cursing my lack of an XBox. The setting is Rapture, a failed experimental paradise beneath the sea. Envision a society of genetic elitists living in harmonious superiority...at least until the discovery of Adam, a genetic material with the power to enhance already overenhanced beings. Queue madness, desperation and bloodshed. You come in shortly after total chaos has begun and bodies litter the deserted seascape. Soon enough you will meet "Big Daddy" (refer to screenshot), deep sea guardians of young girls called "little sisters" who look normal enough until you get up close enough to notice their awkward features and massive eyes. Later, you'll have the pleasure of watching these young ladies extract the Adam substance from corpses with a large needle and store it...in their bellies. If your skin isn't crawling by now, you impress me.
I could go on (the demo is a delicious 20 minutes), but I really have no reason to-all my delight buttons have already been pressed. It's got atmosphere, unidentifiable creatures, horror, and a story good enough in the first 5 minutes to make me claw for the rest. It's being called an "FPS RPG", interestingly enough....while I rarely play FPS, I would play this in a moment. Of course, this is an obvious game choice for a total Silent Hill fangirl, but still it's been a while since I've actually been so fascinated to play anything as I am to check out Bioshock.
It's coming out for the PC as well, so now all I have to do is upgrade my computer so I can run the damn thing. Unfortunately there's no release date as of yet, so I guess I'll have to lick the screenshots in the meantime.
Posted by Colette Bennett at 1:42 PM

Hey babe! How do I get one of these cool dealies? I miss talking game-talk with you! I have so many cool tidbits to share with you I don't even know where to start!