Games for the Heart: To The Moon 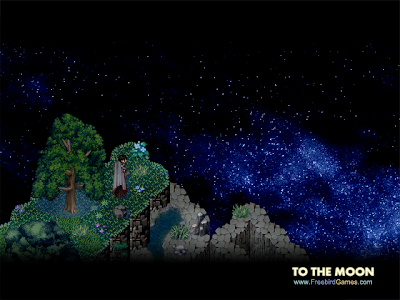 I've been waiting.
While the world of games whirls around me, busier than ever, constantly getting bigger and better and telling stories with graphics so lifelike, it seems like it won't be long until we can hardly discern them from real life. And they keep coming out and I keep waiting to feel something, anything, about the next big thing. I keep watching everyone else get excited.
For thousands, even millions of gamers, the "big budget" game is satisfying what they want. It's awesome, but it's also frustrating, because what they want is not what I want. What I want is something that I learned about almost twenty years ago -- that games could not only have a story, but a compelling story, one that made you not only care about the characters, but love them, and be sorry to see them go when the game was completed, feeling as if you were watching friends walk away and wondering if you might ever see them again.
To The Moon is that game, except it's not twenty years old, even though it looks like a Super Nintendo game. Actually, it just came out a few weeks ago. If you have a soft spot for games that dare to go deeper than just the surface, you'll hear it instantly in the soundtrack, which has a main theme that composer Kan R. Gao cleverly embroiders throughout the story. Telling a tale with a single piano melody is not an easy feat, but I'm betting you'll remember that beautiful music long after you've completed the game.
At the heart of To The Moon is a dying man, Johnny, and two doctors, Dr. Eva Rosalene and Dr. Neil Watts. The doctors have the power to alter a person's memories, and Johnny has a dream he wants to fulfill before he passes away: To go to the moon. In order to make that wish come true, they will have to journey backwards through his memory to learn all that they can in order to get to the point where they can make a change.
Many games tell a story, but the most courageous games tell real life stories, and the thing that makes us connect to them is that they resonate with some bit of what our own lives contain. The idea of winding back the clock of our lives and seeing where we've been and what could have been different is an intoxicating idea for anyone, as is the thought of going back and changing it at the end to make it more like what you wanted.
To The Moon knows this, and it executes it with elegance and enthusiasm. Like the Super Nintendo RPGs that are still beloved to so many gamers now, it balances out those human stories and moments with goofy humor that keeps us smiling and makes it all easier to process. It's not afraid to show us tragedy, either, or the parts of life that we wish we could forget.
Most importantly, it exhibits something that is absent in so many current games today: The ability for a developer to be vulnerable about his or her creation. By offering exactly the game envisioned with no concessions about what is "best" or what will sell, we invite our audience in. We take a chance. And if they choose to take that chance as well, they become vulnerable too, which means they are open to be affected on the deepest level by this thing we've created.
We engage in entertainment for many reasons, none better than the other: to laugh, to cry, to scream, to be thrilled, entertained, scared, affected, taught something new. And what To The Moon reminded me of is that for every dozen games that have polish and entertainment and play it safe, there are always the tiny treasures you find by sifting through the sand. You might have to work harder to get your hands on them, but once you do, they'll present experiences that you'll never forget -- experiences that make you a better gamer, a richer person.
In other words, my wait was over.
Posted by Colette Bennett at 8:27 PM

I would so love to play this game. Which platform is it on? Sorry if you mentioned it but I was busy thinking how nice the story line sounded. I've noticed that I actually miss the simple midi music of games gone by. At the time that simple music was just as effective as the full mp3 music we hear now.

Sound like something I must drop everything and play right now. I think more and more, the generation of gamers in their early 30's, the ones raised on NES, but started coming into their own with SNES RPG epics and story-driven adventure games on the PC, are left hungry for tight, but rich story experiences. Slogging through Persona 3 or Lost Odyssey, although probably supremely awesome in terms of concept and experience, are too long. Contrariwise, a lot of big budget games are shallow in concept, as fun as the experience may or may not be.

The being said, I am glad for the indies and appreciate someone of your Klout in the games journalism circuit touting something new. Not that (knowing your tastes from Twitter/blogs/Retroforce) it is against character, but it is nice that word gets out there. Especially nice that you wrote about something I never ever heard of (being someone what tries to keep an ear to the indie tracks).

Long story short, will be downloading once I get on the ground after my flight.

On the subject of more mature, story-driven indie games, I just played Trauma last night. Short (<2 hours to complete everything), but great experience. Like really a really well-crafted short story, albeit on written in stream of consciousness style (since it is set in the dreams of a woman recovering from a car accident and contemplating the meaning of her life and the path she'd taken). Thought your readers (and possibly you) could use a recommendation.

Oh my god, the music in To The Moon made the world stop. It's captivating, ty so much for sharing this. I'm a passionate gamer and I'm always LF for that which would draw me in a new way, I'm defnitly getting this game.