The Endgame Syndrome; Why do we abandon games? 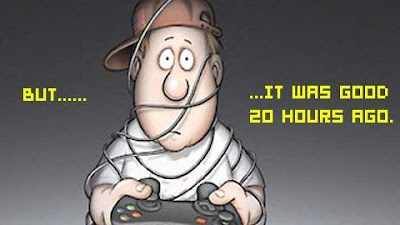 As most of my Destructoid compatriots know, I await RPGs with intriguing storylines more than any other type of game. I enjoy nothing more than to sink myself into a rich plot, get to know the characters, and most of all, experience some form of emotional fulfillment at the end of the story for the work I've put into playing it. To my surprise, the last few I have looked forward to I've gotten fifty to sixty hours into and then simply never picked up again. Why this sudden transformation from game committment to total disinterest?

I clearly remember finishing a lot of the games I played for the NES, and I can't blame it on scarcity of product. Between friends that generously shared large cartridge collections and the game rental store down the street (Performance Hobby! I salute you), I played hundreds of games released for the system during its lifespan. Since I started playing often when I was about ten or so, I know I had the free time to complete them, but it seems to me something more was at work as to why I finished those games.

In the case of the games I was most driven to complete, I was so absorbed in them that I thought about them even when I wasn't playing them. Other new releases didn't get in the way because I wasn't interested in them until I completed the one I was playing. Chrono Trigger and Final Fantasy X were great examples. I held them akin to reading a great book - by reading other books at the same time, you distilled the purity of the experience of the story.

In the current state of gaming, releases come out so frequently that we constantly have new "stories" to choose from. The biggest catalyst of "Endgame Syndrome" is definitely this factor. Since production values and budgets have risen to new heights, most games are gorgeous to look at. Some argue that one must wade in a sea of pretty games to try to find the ones that are worthwhile, so consumers are constantly sifting through large amounts of content and don't have the patience to spend on completing a game.

Another major factor seems to be length. BioShock was completely engaging, yet presented the story in a shorter timeframe. The more time you have in which to tell a story, the more challenges one faces to keep a gamer engaged. Considering the average attention span is twenty minutes, it's no small feat to create a game that can remain interesting to a player after 40 hours of play. Structural variance is also a key -- If you're doing more or less the same actions for the majority of the game, are they fun to do?

Most difficult of all is the experience of playing an enjoyable game and then abandoning it after committing many hours to the storyline. Eternal Sonata, I'm sad to say, fell into this category. I was pleased with the story, but I didn't think about it when it wasn't in front of me. It leaves you feeling disappointed when Endgame Syndrome kicks in in these instances. I did want to see the ending, but the drive to do so just evaporated, leaving me as confused as waking up naked with an otter. ( I need to stop drinking at those Zoo-To-Do events.)

Is it that games aren't what they used to be, or is it that gamer attention spans have shortened over time? I fear that some of both are present, although I am always hoping to be pleasantly surprised. The shape of the industry that creates these games has dramatically changed. In 1985, few people would have dreamed that games would one day rival the film industry. As a result, more experimental projects may have turned into playable results, which at the very least promoted creativity.

Whatever the secret formula is, recent feedback proves even RPG giant Square-Enix can't always hit the nail on the head anymore. Avoiding Endgame Syndrome is simply a matter of being choosy about what titles you take home -- and even then, there's no ensuring you'll feel the spark. For me, those unforgettable stories that are worth finishing are worth the search, no matter how many duds I have to sort through to get there.

Posted by Colette Bennett at 1:23 PM

Structural variance is huge for me. Honestly, when I replayed Rainbow Six Vegas I kept getting levels confused with F.E.A.R. and SiN. Games like BioShock, which actually stand out, are more engaging and I'm more likely to finish them.

Cool blog by the way. I'm trying to relaunch mine, any advice?

As an avid RPG player myself I couldn't agree with you more. I don't mind putting a lot of time into a game if it has a rewarding storyline. But with so many games coming out at the same time, I find myself becoming that ADD gamer that can't focus on the RPG anymore. And sometimes not looking back. I always thought it was work/real life affecting it, but perhaps it is more of a case of being able to finish other new ga mes in a shorter period of time. And new RPGs just not being as rewarding.

I really don't think it's that the stories are lacking, but that we've seen the same types of stories for decades.

There is also the issue of game playing time as a child vs. as an adult. Which I expanded on in my own blog.

I don't really agree with the reasons cited...at least not for games that are not RPGs. "End game syndrome" means just that, near the very end. I've been going back and completing games on PS2 that I stopped short of completing, and that included Kingdom Hearts 1 and 2, Castlevania Curse of Darkness, and a few others where I was *right* before the final boss(es).

I'd say games with leveling systems commonly have this problem because you think you're unprepared, or you play a little bit and feel you are unprepared, but you don't care enough to grind yourself in final-boss fighting form.

Or, there are sidequests you could complete to accomplish that, but they tend to be boring or too grind-heavy to bother with. In the case of the KH games, I was plenty prepared and just underestimated how strong/good I was as-is. In the case of Castlevania, I was underleveled, and I just whipped out a codebreaker to "get it over with." Finishing the KH games were worth it--CV, not so much.

Lately I haven't had a problem with it on new games, because titles like Bioshock, Gears of War and Halo 3 have been relatively short and easy and don't give you time to become bored or fatigued.

My biggest problem in not finishing games is usually because I have about 2 or 3 other newer ones coming along that I am excited to get to, that I just don't bother to finish the game I am currently playing.

Most of the time I "try" to finish games.. but when they are really, really, really big I just tend to walk away from them. I usually don't get bored. If it's a bad game, I will just walk away and never pick it up again. But generally if the game is too long, I've got other games I want to invest time into, so I can't finish every game I start playing.

For example, I loved FFXII and GTAIV, but never got around to finishing either of them becuase other games came along.

Right now I'm playing Assassin's Creed, but I have Mercenaries 2 burning a hole on my game shelf still in the wrapper just waiting to be played.. plus Fable2 and Fallout3 are right around the corner! Oh my.. what is a girl to do??!

I never used to have this problem of excess games to play, and I probably shouldn't complain about it... I just need more free time to play and finish them all!

Personally, some of the reasons I'd say this occurs is usually down to bad game design on the part of the developers. Many end game sections are basically rushed together quickly, with more effort spent trying to make the first areas entertaining since more people only ever get to playing those first areas/levels. An example might be, in a non RPG genre, The Legend of Zelda The Wind Waker and Metroid Prime, where the end games ended up being more fetch quest than gameplay, and the dullness of the sections put off numerous players. A certain site I know calls that Xen Syndrome.

Another factor might be plain old difficulty hikes/walls near the end of games. Many I've seen, especially RPGs usually have a massive difference in the difficulty of the earlier game and the end game dungeons, with the levelling of enemies and bosses usually being at a point where you need to quite heavily level grind to have a chance at survival. That's off putting to many, since it catches them off guard. Non RPG games have it too, except it's usually a leap from relatively reasonable adventuring/platforming to things straight out of Battletoads. Maybe because the developers thought that they didn't have to think about the player much or keep the difficulty to a reasonable level near the end of the game. The frustration here was pretty much said by your Difficulty Arc and frustration article, and you're more likely to quit a game when annoyed in such a way.