Dungeon Runners not quite Diablo, but better than cold toast 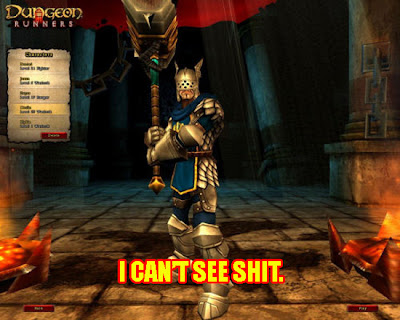 I was reading Play Magazine a few days ago when I saw a blurb for the new NC Soft MMO Dungeon Runners, which featured two Colette- friendly selling points: no initial subscription fee (but if you do want the full version of the game, it's $4.99 a month, cheaper than your Mountain Dew habit) and comparisons to Diablo 2. Cheap is good, but not if it sucks. However it is a known fact that if you compare Grandma's Blood Pressure Challenge to Diablo 2, I will try it for at least five minutes. My D2 addiction is still alive and well a good ten years after the first time I played it, and still nothing to this day has quite hit the sweet spot of stabbing wraiths in the face. Still, I keep hoping.

After a little hands on time with Dungeon Runners, I realized it was actually an amalgam of several other games. It has quite a bit of Diablo in it, a bit of WoW, and a pinch of Kingdom of Loathing. It has the point and click action and non-intrusive background soundtrack, and the inventory menu is an almost direct steal from the famous demon slaying adventure. WoW comparisons come in when you get quests and speak to NPCs, complete with question marks above heads. In my initial inventory, I found a red bottle called "Potion of the Daring Noobosaur." You clever geeks, you!

The control is not bad, but I think the thing that no game has mastered since D2 is the ease of control. This game allows you to point and click as Diablo did, but something about it is more awkward and wooden. The battles are slowish, and although they feel fine, sometimes I have to admit I just want to kill things faster. It's a huge point of importance for me how battles handle in a game, and can eventually make me give up or addict me for life. How does each weapon feel in use? Is a kill blow satisfying, or just there? A resonant crunch or the timing of a swing when my character uses a mace can make all the difference in the world.

I can't really tell you if Dungeon Runners is worth your money since you don't have to spend any to play it, so let's say it might be worth a download if you like features of the aforementioned games and want to play something free. I'm not disappointed by the game as much as I don't really have a lot to say about it. I have high expectations for MMOs these days. On the other hand, I don't mind a clone if it's a clone done well (see The Legend of Dragoon in your nearest gaming dictionary). Either Blizzard is the greatest developer in the land -- and it makes you wonder when you look at WoW numbers -- or no one has managed to copy their timeless formula well. If they ever make time for Diablo again between WoW and Starcraft, maybe then I can finally get the fix I've been endlessly searching for.
Posted by Colette Bennett at 12:12 AM