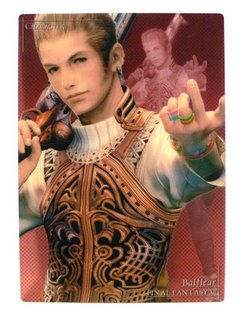 I wanted some time to fully absorb Final Fantasy 12 before attempting to post about it. As usual, it's a tremendous universe to explore and a full cast of detailed characters. That being said, I have a few clear impressions I feel are ready for sharing at this point.

One. There is a character in every Final Fantasy game I want to tear the clothes off of. Any player who says he doesn't have one of these in mind when they play a chapter of this series is lying (or at least the past few installments). Square make impossibly good looking characters. Even after seeing the trailers and pictures, I hadn't the slightest idea who it was going to be. Ten hours later, I can easily say it's sky pirate Balthier who would get my pants off with embarrassingly little effort. Think James Bond meets Han Solo and you've just about got it. Just a warning ladies...wear your chastity belts. Or don't.

Two. The battle system for RPGs has been revolutionized with this game's release. Any MMO player will easily recognize the flow of the system. The use of colored lines to indicate your target is simple and helps to keep the new system from being confusing. Even despite that, it's definately a bit of a transition to adjust to the new style. The thing I notice the most is that as an RPG player, I have come to rely on turn based battles as an excellent time for me to pay attention to other things, like feeding my cats or changing laundry. Despite the gambit system, you still have to pay close attention to the way the fight is going and if you will need to modify any of the actions in order to keep your characters alive. And that leads me to my next impression....

Three. The game is harder than it's predecessors. This is a good thing, as I think the complaint of many gamers is that the formula of RPGs puts them to sleep. FF 12 will definately not have that problem. I've hit two sections so far where I've plowed forward, assuming that I'd have no problem with what I was about to face, and died shamefully quickly. It takes a little more use of the gambit system and the licensing board, which I enjoy more than I have many of the previous game systems. It's completely open ended, allowing you to design characters' skills as you wish. The acquiring of weapons and spells is a two step process, ultimately challenging the player to do a bit more work to make characters stronger. One thing this game is not is boring.

Lastly, the story is absolutely engaging....I get the feel of such epics as Lord of the Rings and Star Wars. As always, Square don't disappoint....but this time, they really have outdone themselves. The story has a depth and scale that even recent FF games didnt touch. And, unlike bore-a-thon RPG Xenosaga, the story is actually good in addition to being epic. It's amazing that the bigger the budget, the more beautiful and vapid modern RPGs become. It's disappointing to the little girl in me that gawped at the graphics of games like Loom and Grim Fandango and fantasized about owning a game console that could make games look so good. As usual, my faith in this game series is completely validated. The nice surprise was that it was also better than I expected too.....and I expected a lot. It's a great pleasure to have your hopes exceeded in the game world.
Posted by Colette Bennett at 9:01 PM

I haven’t been playing ff12 personally, but I’ve been watching my roommate play it while I work on finishing the original Neverwinter Nights ;)

Han solo meets James Bond? How am I supposed to compete with that? Oh well, Balthier is a badass and one of my favorite characters. Besides, I can’t get too upset, the guys get Fran to fawn over. I’m sure that will make for some very interesting cosplay costumes for years to come.

I like the new combat system a lot. The gambits make gameplay much smoother without taking over total control. I think it’s just as easy as a turn based system, because you can easily pause combat at any time.

As I watched the game unfold, I also noticed a great deal of Star Wars influence in the plot. This seems like a good fit, because the political aspects of Star Wars were the most exciting, and this installment of ff is filled with political intrigue.