The eternal delights of Square Enix 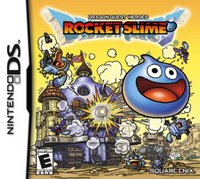 I was sketchy about the merger of Squaresoft and Enix when it was first announced. I liked Dragon Warrior as a kid, but I thought of it as another class of RPG-a little lesser than Final Fantasy. I recently played through the new Dragon Quest game, and frankly I still feel the same, even though the new graphics were fantastic and I squeaked with delight every time I fought something familiar to me from one of the old games. I just like the stories less, although I certainly wouldn't call them poor. But I have to say, with the release of Rocket Slime, I really see the influence of both companies well blended into a single adventure...and that is some thrilling stuff to see.

Of course in Japan, this is already a sequel. The original game, Slime MoriMori Dragon Quest: Shougeki No Shippo Dan, came out in December 2005. What I love about this type of game is a distinctly Japanese attitude-the slime's expression on the cover is total evidence of that. The Japanese have this wonderful tinge of complete insanity through a lot of their media. It really pleases me in a very childlike way. At any rate, the game lands you in the kingdom of Slimenia (hee) where you must fight against the Plob, a mysterious monster brigade who have kidnapped all the slimes from the capital city, Boingberg. I know, some of you are wincing. But some of you are also doing a silly little dance at the mere idea of it. Latter, this post is for you.

You get to launch Rocket Slime out of a tank in order to combat your enemies, which he's clearly thrilled about based on the cover. I'm just thrilled about playing, myself. It looks great on the DS screen-reminds me a bit of those Chrono Trigger days. I just feel all warm and snuggly about Square-Enix right now. Sure, they have their misses (Unlimited Saga made my stomach ache) but more often than not, I'm still delighted with their creativity and ability to write fantastic stories. With the wait for Final Fantasy 12 almost over (this is going to be the best Halloween EVER), I'm so excited I'm about to go streak in front of their corporate offices to show my appreciation. Until I get arrested, that is.
Posted by Colette Bennett at 2:53 PM