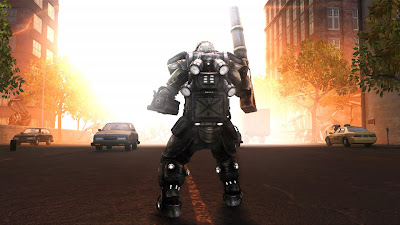 As many of you may know, I am hopelessly in love with a series of games called Earth Defense Force. Or, more specifically, one title in the series, Earth Defense Force 2017, which was an early launch title for the 360. Made by a Japanese developer called Sandlot, this series of games was part of a collective called "Simple 2000 Series" -- cheap games that pack a lot of fun for the price. The third game in this series, called Chikyuu Boueigun 3 in Japan, was eventually released in the US as Earth Defense Force 2017.
The game was a race against evil masses of invading aliens to save the planet, and if anything was like being an active part of Starship Troopers. As for craftsmanship, the game seemed to be pretty shabby around the edges, with terrible voiceovers, poorly animated character actions and a framerate that simply couldn't keep up when the screen got really packed with enemies. In other words, an instant camp classic.
Let's fast forward to the announcement of Earth Defense Force: Insect Armageddon, which was news I had been waiting for for some time. However, it wasn't Sandlot behind the title but Vicious Cycle Software, who had previous come up the original Puzzle Quest. Hopeful, perhaps, but to recapture the spirit of such perfectly executed black comedy could be a challenge. Could they pull it off? Would the game be too good to be bad in the way that made 2017 such a classic?
Insect Armageddon came out yesterday, and I can confirm that not only is it not a bad game at all, but it's also much better made than 2017 could have ever hoped to have been. Up to this point I'd scowled at the idea of that, thinking that good game development could only hurt this unintentional masterpiece and that it needed to be bad in order to be good -- kind of like "The Room", which is like watching the various stages of an eight car pileup on the freeway. But in fact, it managed to retain the spirit of the original games while cleaning up what was wrong with them, which was something that I doubted was possible.
One of my favorite parts of 2017 was the voiceovers, which were stilted and awkward with hilarious dialogue such "When this is over, let's go get a bite to eat!" Vicious Cycle opted to hire real voice actors to deliver better written lines that still manage to be funny, such as fellow teammate Cyrus occasionally screaming "Welcome to Earth!" or a helpful pilot who smoothly delivers the usual on-an-airplane speech and casually informs you that we will likely all die before thanking you for flying. The laughs are still there, and I love how they chose to go about bringing the to the table.
Earth Defense Force 2017 is still a great game, even if it also simultaneously manages to be terrible. I've had countless hours of fun with it, and I can't say some part of me doesn't miss seeing the awkward body animation of my soldier as he runs sideways or laughing at useless armed vehicles with names that sound like Starbucks drinks. But I have to hand it to Vicious Cycle: they made a game that has all the spirit of a camp classic, but subtly sneaks in and improves on the broken parts without distracting you from the action at hand. It's what makes a game great, and you can tell that they studied the previous entries in the EDF series with respect and serious attention to detail.
We've recently heard that Sandlot wants to make their own EDF as the next part of the series. Whether or not they can bring us another terrible but wonderful game remains to be seen, but one thing is for sure: Vicious Cycle has raised the bar. Could we still fall in love with another poorly made EDF, even if it has the right charms, or will Armageddon spoil us to expect more from now on?
Posted by Colette Bennett at 10:30 AM

I'm ashamed to admit, that despite my interest in the niche and camp, I have not heard of this series until you brought it up.
Still, a quick Google search seems to imply lots of fun gameplay at the very least. I may not have the same interest as you did regarding 2017 and what not, but I might pick up Insect Armageddon regardless.

I've been hearing really polarizing things about this game on both sides. Do you think maybe it's because some people have trouble leaving their expectations from other (more crafted) shooters at the door, or is it just too hard to bottle lightning twice for them?