A Thousand Years of Dreams: Mortality in Lost Odyssey 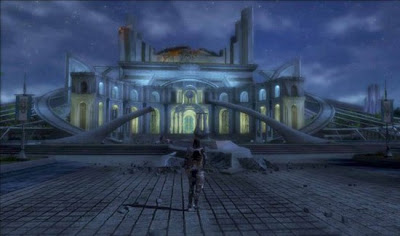 While playing RPGs, I have encountered situations that sometimes predated me having the same experiences in real life. As a little girl, the first of these I found was comradery, which took me a while to find since I was the bookworm type. This infused the games I played with a sort of private and thrilling magic, which hasn't entirely worn off to this day.

While Mistwalker's new RPG Lost Odyssey does follow the conventions of many other RPGs, it sets itself apart with a feature called A Thousand Years of Dreams, in which you recollect the experiences of your character's past. We've all played games that introduce to our characters' memories, but since Lost Odyssey's Kaim is immortal, the memories are suffused with something more: the absence of mortality.

Much like BioShock and its underlying moral themes, Lost Odyssey presents the player with a richer experience which I believe is the future of RPGs: graphical superiority, yes, but more importantly, having the ability to engage our mortality, including our sense of what it is to be human. Welcome to the next generation -- playing games with the ability to excite your senses, engage your emotions and grasp your own transience.

Hit the jump for more.

Depending on how long you've played RPGs, you may have a very specific expectation of what you want in one. Since I've played them on and off for the last twenty years, I'll chuck a formulaic RPG out the window faster than a hooker administers a BJ. Usually, playing the same old structure isn't enough to hold my interest through eighty hours of game time. At this point, there has to be something different, something that can shake me up enough to make an impact.

Enter A Thousand Years of Dreams, in which the immortal lead character Kaim recalls his memories one by one throughtout the course of the game. Like many other RPGs in which the lead character has lost his memories (ahemcloudahem,) we are intended to develop an emotional attachment about the character we are playing because of his or her past. Since you are playing on a modern console, you would think that Lost Odyssey uses superior graphic capability to its advantage to tell the stories of Kaim's memories, no?

Instead, the developers made a braver choice: they tell the stories using only words.

I can see you reading this now and saying "Words? Like on the page of a book? LAME!" I have two words for you -- you're wrong. It isn't lame at all; in fact, it's the most elegant tactic I've seen used in an RPG since Final Fantasy VII's Cloud Strife floated in a dream world and remembered he wasn't who he thought he was. Instead of taking the obvious route, it does something games did before there were graphics to support them -- tells you an amazing story and leaves your imagination to fill in the rest.

The irony of this approach is palpable. Gamers have been complaining more and more as of late that they don't want to have to read a bucket of text, and now here I am telling you that it's the best thing since goat rape. Luckily, those gamers can skip the dream sequences altogether and still enjoy the action, which is solid enough on its own. The dreams are the best part of the game and flesh out the main story with depth and emotion, but if you want to leave that behind, that's your loss.

This nearly literary approach could possibly be effective on its own, but it is accentuated by something that completes the package: writing brave enough to delve deep into Kaim's lifespan, reflecting back startlingly painful bits of immortality and leaving you starkly aware of the vulnerability of human life. It has been a long time since a game has actually reached my emotions in any way, but Lost Odyssey has finally done it, reminding me that it's worth it to sift through all these RPGs after all.

A Thousand Years of Dreams taps into the very spirit of what makes RPGs great, which is why I can say that I see the future of next gen adventure gaming in its courageous approach. As we come closer and closer to playing games that are indistinguishable from our real lives, they will also have to step up to the plate when it comes to matching the human spirit. Literature and film have long probed topics like mortality and humanity, but games are still new to the territory.

Does this mean that every RPG has to send us into a spiral of existential crisis, leaving us wondering who and what we are and why we live human life? No. Obviously this is heavy stuff, and not always what we want to spend our free time on. Used sparingly however, it can create a gaming experience that is the most realistic gamers have ever encountered. Combine that with graphical prowess, and you have a truly modern interactive experience. Let's hope the anti-game crusaders have prepared well -- they aren't ready for what is to come.

Posted by Colette Bennett at 1:42 AM

A well thought out and well written article. Thank you for taking the time to do this, and I hope to find some more posts from you. Have a nice day