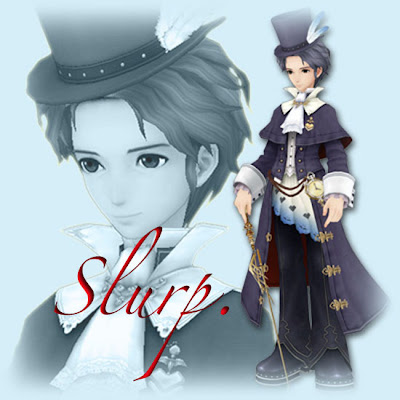 After five hours of Eternal Sonata, I can finally admit it to myself: I have a crush on Frederic Chopin. Before you start laughing, think back over all the games you've played. Maybe you were so absorbed in the storyline you didn't even realize it. Put down your controller in hushed reverance for all of Sephiroth's cut scenes? Waited patiently for all the moments you could get extra glimpses of Lara's endowments? Maybe your heart even fluttered any time Balthier was dashing and debonair, dangerously straddling the line between androgny and rampant homosexuality. Either way, more of you are guilty of this crime than you'd like to admit: The Video Game Crush.

Your average non-gamer (or even some gamers who have never experienced the phenomenon) will be quick to say,"Why would you get a crush on someone who isn't even real? That''s stupid." Stupid, perhaps, but I can't help but think about all the imaginary people I'll fallen a little in love with, and not just in video games. Ender Wiggin in the Orson Scott Card novels is one of my long standing not-real crushes. How can any logical person find themselves in this position? The answer is simple: The heart is not logical, and a video game is an ideal setting to entertain illogical things. You're already flying along the coast of the Etrian Sea Universe in an armored flying narwhale wearing a crown of igloos, so why not fall in love with the Princess of Obscuria?

It also seems that when we play games, we get to meet many characters who we will never meet the real life equivalent of. I am pretty much assured that I will never meet anyone as metrosexual as the Final Fantasy boys until I head straight to the streets of Harajuku, so it makes sense that those characters might be a little fascinating. As far as female crushworthy characters are concerned, the formula is even simpler: Few real world women kick ass and look as sexy doing it as the Lara Crofts and Chun Lis of the world. Then there's the sweet and helpless formula, which Aerith of Final Fantasy fame is the reigning queen of. She looks so sweet while she's being stabbed through the chest with a sword, doesn't she?

Some people think it's ridiculous, but in my mind having a crush on a character in a game is as normal as getting choked up when a great game ends. If the character designers meshed well with the writers and did their job right, they created characters that were ultimately real enough to emotionally engage you -- something that seems to be getting harder and harder in RPGs every day. It's a compliment to their skills that I can't stop thinking about that dreamy Chopin. The voice actors, of course, are the glue that holds it all together. In a modern era of gaming that makes fully voice acted games the norm, they bring these characters to life or leave them behind to blend into the scenery.

So, got a crush? You can admit it. It's okay. Unless your crush happens to be Pyramid Head, in which case you're an ill little gerbil and really should be confined to a damp room with no doors. Really, it takes all kinds.

Posted by Colette Bennett at 12:29 PM

You're already flying along the coast of the Etrian Sea Universe in an armored flying narwhale wearing a crown of igloos, so why not fall in love with the Princess of Obscuria?

Requesting screencaps of this fabulous beast.

So... there's this one girl... in The Sims 2...
She's my neighbor and she brought me flowers one day! She also goes fishing with me and stays over late nights even though she works really early in the morning!
I <3 my sims!

Well, currently I'd have to go with Alyx of Half-Life 2 fame. I'd like to call her more "realistic" than other made-up female characters, but then the full irony of the statement hits (though admittedly she's more developed than most, and somehow pulls off both the gun-toting badass and the vulnerable damsel in equal parts).

And of course, when I was 5 or 6 years old, like Foreigner, I wanted to know what love is. And dear god did I want Princess Peach to show me. I was all over Super Mario Bros. Super Show like shells on a Koopa.

Gwen (after she grows up in Eye of the North obviously) from Guild Wars.

And yes Balthier from FFXII.

My most significant and long standing crush is Jade from Beyond Good and Evil. The thing with Jade is I desperately want to ask her out for coffee at a funky Hillys cafe.

Well I've had my share of crushes from Video game characters but I've always had a thing for Garnet from Final Fantasy IX (my favourite FF). She's sweet, rebellious and super cute!

Although I never got into playing Zelda much myself, as an avid spectator, I've always had a crush on Link. Something about chivalry and selfless acts really get to me. Not to mention the whole phallic sword deal. :)
Similarly, but not video game related, I've also had crushes on Speed Racer - obvious bad boy attraction - and Schroeder from the Peanuts - quiet artsy type = *SWOON*
We're sick.
G.

Well, who could blame us with all the choices there are in video games? Maybe some of us don't have that many options in the real world, so the "pretend" world is the realm where our feelings can set themselves free to wander and roam.

If I had to choose a few off the top of my head, my top 5 female video game crushes would be:

But, as stated, with all the options in the virtual world, why not right? On a side note, that list was harder to compile than I had imagined!

Nothing wrong with crushing on fictional people.

I have a crush on the real Chopin, but I'm not sure why.

I think it is a matter of imagination. People who never develop these types of crushes must have kind of a dry intellect and relationship to the world around them.

At least, that sounds good to me, since I had a pretty big crush on Agent Paper for awhile...

I've always thought it a little odd to single out love toward characters as somehow being weird and embarassing, while going ahead and considering all sorts of other emotional reactions (fear, sadness, excitement, sense of accomplishment) to be perfectly normal. It's all brain reactions to virtual stimuli regardless; seems a shame not to enjoy them all.

It's alright.... I have a crush on the real Chopin, AND the Eternal Sonata Chopin. I just don't know why. You'll think i'm crazy because i'm only 14.

Thank you so much for sharing... it was refreshing to read, as I have also had my fair share of video game crushes.. just to mention a few:

But you're right it's the voice acting and well written stories that totally draw me in like a sucker.

Ohh.. I have had so many videogame crushes, from Tekken to Final Fantasy ;) First I felt so embarrassing, but I get used to it!
It is just like a "training" for futures love-relationships. The truth is that there is no need to shame!