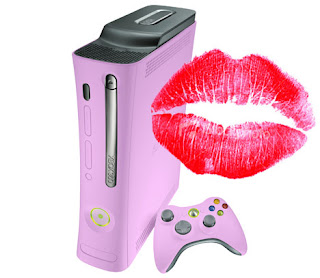 Rewind back to the golden days of November 2001. After repeated delays, Microsoft finally reveals their contribution to the gaming world with a console known as the Xbox. The first system to boast a hard disk drive under its hood, Xbox seemed to be trying to approach the market from a more advanced angle, which was welcomed by many gamers. As with all new consoles, I was anxious to try it out.

Hands on, Xbox was a little uncomfortable right off the bat for me, and I don't think I have to tell you why: controllers the size of the Hulk's fists are not generally comfortable for the normal female hand size. The console itself also weighed in at a whopping 8.8 pounds, larger than the average newborn. Size fixations, anyone? Regardless, it's the games that make a system, not the housing, so I chose to ignore the big black daddy attack and focus on the offerings yet to come.

Of course I played Halo, which ran flawlessly and I could see the reason why so many gamers were addicted. But as I went through the launch titles available, something started to slowly come into the clear: every title for the Xbox was masculine in nature. I wasn't looking for Barbie's Pony Adventures here, but I think the average gamer girl tends to avoid titles like Brutus' Mega Mutilation Spree of Testicular Glory. Still, being the patient lass I am, I was willing to watch the release schedule and give it another shot when the titles came out that sparked my interest.

The clock ticked. The releases came out. NFL Fever 2002. Project Gotham Racing. Moto GP. Mech Assault. Tom Clancy's Ghost Recon. Halo 2. A slew of fine titles, looking their best thanks to the Xbox's advanced graphical capability. Most notable to this gamer, however: no RPGs, no platformers, few strategy titles, and absolutely NOTHING cutesy. Xbox was a console for a real man. Welcome to the birth of my resentment towards Microsoft. I don't give a shit about being a female in the gaming universe; it's mostly an irreverent detail. But the alienation of any minority by a console maker seemed an ugly snub to me. If Xbox had been the only console to have when I was a 9 year old, I wouldn't have become a gamer. Thank God for Nintendo.

I turned my attention to the other consoles on the market and ended up spending the majority of my money and time on Sony's Playstation 2, which covered all genres of play and did a fine job establishing itself as one of the strongest consoles of all time. When Xbox discussions happened, they sailed over my radar. I had lost respect for Microsoft completely. When the 360 was released, I expected a prettier version of the same Xbox, and seeing it in the beginning of its lifespan, I still found myself unable to care.

Soon after, something great happened. It became public knowledge that the sales of the 360 in Japan were really poor. After all, the Japanese are responsible for a huge chunk of the game buying community. What do the Japanese like to play? RPGs and quirky titles. Just what Microsoft wasn't offering. So in the long run, they got the ultimate kick in the pants -- shitty sales figures. How's that for motivation, guys? Blue Dragon was their answer to the quandry, and as of January 2007, it holds the award as the best selling title in that territory. Dag, maybe those role players are important after all.

XBLA was already gaining steam by the time this took place, and the weekly releases were starting to make me perk my head up again. TMNT Arcade? Alien Hominid? They were blowing the Virtual Console's wilted selections right out of the water. Most of my friends were raving about the fun of online play, and titles like Dead Rising were starting to look damned yummy to me. By the time I got 10 minutes with the smooth interface of XBLA, I was hooked. Upcoming titles like Bioshock and Assassin's Creed are giving me major happy pants, and with Final Fantasy being discussed as a possibility to no longer be a Sony exclusive title, it seems I am right on the edge of finding the new perfect console. Who've ever thought it?

I'd like to delude myself by thinking that Microsoft decided to rethink their decisions about this console because they realized they were alienating a lot of gamers with the original Xbox. I know better though. It all came down to the almighty dollar, and since this is still a business last time I checked, I do understand why. Regardless, I'm happy to see a console I once felt I couldn't interact with at all become the best the market has to offer. Perhaps PS3 can become a competitor for this title later in its lifespan, but for now, the 360's got it going on, and I'm pleased to have been converted. Keep the RPGs coming!

Posted by Colette Bennett at 1:00 PM

you gots the happy pants for 360 now huh? Nice! I, like you am a total RPG junkie so Blue Dragon is hotly anticipated...now I gotta get shivering isles to expand my oblivion fix.

You're right on in my book. I think the will-power of Sakaguchi is about the greatest asset Microsoft has in its corner for developing a following in Japan. I'm itching to learn more about Lost Odyssey and ASH.

Another factor that really interests me about Microsoft is their strategic position in empowering homebrew gamers to develop user content, and have it be recognized as legit. XNA and live arcade have the potential to make anyone with a PC and basic programming skills a potential developer, and that to me is reason enough to hope Microsoft could pull off a console revolution yet.

This witty, fascinating blog is one-of-a-kind. Seeing it pop up in my RSS reader really makes my day!

I felt the same way with the original Xbox, coming from a Nintendo fanboy background, most titles being released on the Xbox were not my bag at all, and left me with a strong disgust with what microsoft was doing to gaming. Though MS hasn't quite won me over with the Xbox 360 yet, they are certainly getting there with games like Dead Rising, and arcade titles like Geometry Wars and Alien Hominid. Though, as long as the 360 seems to be 75% FPS games, I don't think i'm quite ready to jump in yet. Strangely enough, the console I have been into most this generation, is the Nintendo DS, that system seems to have a great share of quite a few genres, with even more games in the pipeline. Plus it's easy on the ole wallet.

In general, you are right about the early software for the original Xbox. I feel I should point out a few things in its defense, though:

I had the same impression of the original Xbox when I bought it in early 2002--lots of testosterone-laden shooters. And that was okay with me, I'm a guy who,likes guns.

But then I started getting bored with all the violence and started looking for alternatives.

I was blown away by Jet Set Radio Future. How come that example of cutesy cell-shaded glory was not mentioned on your list?

And as 2002 progressed the xbox released non-traditional RPGs like Shenmue 2 and (to a lesser extent) Morrowind.

And it took a while, but don't get me started on DOAXB Volleyball. It was a little pervy, but it appealed to many females. Were you a fan, Nagiko?

Two words for you:


My Wife and totally crackhead addicted to it. I've come home from work 8 hours later and have caught my wife still in her PJ's playing the game.

'Brutus' Mega Mutilation Spree of Testicular Glory' was a non-gender specific, glorious romp and you know it. The potato controller, not so much.