The Cloud Strife syndrome: what makes an RPG matter? 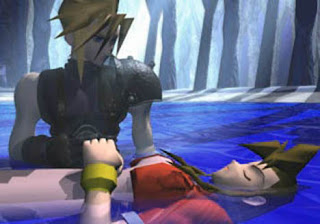 Gather round, little bots. Tonight I have for you a little known tale about the wretched bucket of experiences people fondly refer to as childhood.

Visualize with me, if you will a girl of about 10: short for her age, long mousy brown hair, wearing a ridiculous sleeveless Tour de France shirt, uniform regulation gym shorts and lavender oversized glasses. She's sitting in front of the television playing Phantasy Star 2 for the first time, totally fascinated and absorbed by the characters she's just been introduced to. She's the loner type and doesn't have friends, so while other children enjoy the throes of popularity, puppy love and underage drug abuse, her after school days thereafter are spent exploring Paseo and forgetting the real world existed at all.

Yeah, that dorky little kid was me, and without emotionally rich games, I wouldn't have had the rich experiences that made me fall in love with games in the first place. This thoughtful article from Gamasutra got me thinking about the games that made the biggest impact on me and why.

1. Phantasy Star 2: The opening credits still make me kinda tingly. This was the first game I've ever played that had the balls to kill off an important character. For those noobs who think FFVII did it first, I'm sorry to disappoint you. It was also the first RPG I ever played that chose a futuristic setting instead of the traditional medieval setting. Yeah, it looks like ass next to RPGs of today, but as a kid, I thought about Nei's death for days afterwards.

2. Chrono Trigger: This game is just gold from start to finish. At the time of it's release it was lauded as revolutionary; the multiple endings specifically drew a lot of attention. It never took the heavy route - instead it seemed to keep a brisk pace, always moving forward with lots of events and character interaction. It's weaving of the topic of time travel into the game was so fluid, you never even realized you were exploring major roads of philosophical thought, because you were simply too busy having fun.

3. Final Fantasy VII: Well, you knew it would be on the list, so for those of you who hate it, bitch in the comments. There's no explaining why so many players cared so much about a spiky haired kid with a shitty attitude, but maybe it was the Han Solo formula. Whatever it was, this game is beloved in the annuals of RPG gamers' memories for a reason. Fantastic characters, engaging plot, and a world so highly detailed it was hard to remember it wasn't a real place. If Sony does ever decide to stop taunting us and remake this baby for the next gen, there's going to be a joy stampede.

4. Silent Hill 2: This game is so freaking perfect it makes my head hurt just thinking about it. Masterfully suspenseful and frightning, it draws you into the story effortlessly with absolutely no idea of what you will face in the end. I actually cried at the conclusion. Being so emotionally engaged with a story that you elicit such a reaction is a surefire sign that the creators have done their job well. It's been recently mentioned that the SH team are drawing on this game's feel for the creation of Silent Hill 5, which makes me a happy little muppet indeed.

5. Final Fantasy X: A lot of people didn't like this one and are going to disagree with this choice. Luckily, this is my article and not yours, so feel free to suck it. Playing through the opening sequence between Tidus and Auron completely fascinated me and made me want to play it through to the end. Of all the FF characters in the series, these were the most real to me. The pilgrimage to Zanarkand really absorbed me as well, and the ending is both completely sad and heartbreakingly beautiful. If you care about being truly engaged in your games, this one is a must.

All joking aside, what are the games that engaged you the most as a player?
Posted by Colette Bennett at 5:04 PM

The game that most left an indelible mark on me (in more ways than one) was The Legend of Zelda. I remember exploring the massive world as a little kid with my dad. It was probably one of the best experiences of my childhood, which is why I ended up getting a Zelda tattoo.

Probably the most engaging games I've ever played is Kingdom Hearts, I know it sounds stupid but it is a spectacular game that has a teeny weeny bit of depth to it. I just found that Sora's quest to be with the girl he loved was extremely novel , although the characters apart from the human three didn't have much back story it was still a great game. I'd say either that, Chrono Trigger or Final Fantasy 8.

The game that first really struck me would have to be Final Fantasy 4. I know the first time I saw Golbez and FuSoYa casting Meteo and it didn't work I gasped. I really got into that story.

Great job! I love Phantasy Star 2 and agree that it shook my childhood when they killed such an important character. Enjoy that PS2 ringtone I made for ya!