O Genesis, how did I love thee? 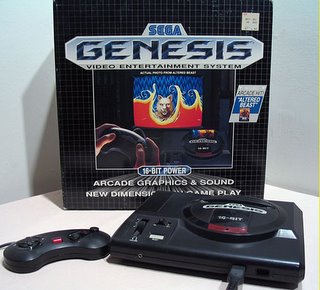 I just saw a picture of this box on Kotaku and was instantly whirled away into a delightful vortex of memories. I think I got this system for Christmas 1989. I was twelve. Considering that the NES was a dinky looking grey box, I thought this system was cooler than the Fonz. Hilariously, when I bought the reissue of the system about 8 years later, it had been resized and was about the size of a sandwich. I guess all that fancy black housing was just for show.

Lo, it was 16-BIT! Double the powah of previous systems! Finally, I could play with arcade quality graphics! Plus (and I miss these days) it came packed with Altered Beast. What ever happened to bundles, people? I know Nintendo is prepackaging Wii with Wii Sports, but you know, some people don't like sports games, NINTENDO.

One of my favorite games, of course, was Sonic the Hedgehog. Blasting him around at the speed of light? That great expression of shock Sonic makes when he hits something? The frustration of watching all your rings explode away? Of course, at the time there was no way to know that Sonic games would be issued ad nauseum afterwards....but who cared?

It wasn't long before Sega decided to follow up on their successful RPG for the Sega Master System and I discovered Phantasy Star 2. I LOVED that game. It was the first RPG I ever played in a truly futuristic setting and set my predilection for that setting in place for years to come. Even at that age, I was already a little tired of the medieval Dragon Warrior type settings and impatient to see designers do something different. Of course, the game has aged and now sitting through all those thousands of leveling fights seems mundane. Still, when I played Final Fantasy 7 and watched the story arc of Aeris, I couldn't help remembering Nei's story from Phantasy Star 2.

There's so much to be excited about with the upcoming next gen systems (except your bank account, which will be vast and empty), but sometimes the nostalgia just hits hard and you'd give your left arm to hear the words, "Rise from your grave!!!"

Posted by Colette Bennett at 3:19 PM